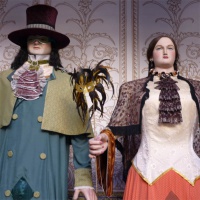 Rodanxó and Rodanxona are the old Casa de la Caritat and Carnival Giants. They belong to the Barcelona Provincial Council, although they've been handed over to the Barcelona Culture Institute and are managed by the Coordinadora de Colles de Gegants i Bestiari de la Ciutat Vella, which coordinates all the district's giant groups.

This giant couple date from the middle of the 19th century, being the first made for purely non-religious, leisure and festive purposes. Their first public appearance that we know about was during the 1859 Carnival, when they belonged to the Born Carnival Society.

The Society was dissolved in 1872 and the giants were handed over to a member, Joan Riera. Finally, in 1891 the Riera family gave them to the Barcelona Provincial Council's Casa de la Ciutat, or House of Charity, so they could be enjoyed by the orphans. From then on, Rodanxó and Rodanxona took part in all kinds of city celebrations, especially the Corpus Christi procession organised by the House of Charity. But, after they appeared for the last time at the La Mercè festival in 1918, they were stored away in the House's warehouse owing to their poor condition.

After they had been shut away for many years, the Barcelona Provincial Council decided in 1987 it was time to bring them out again. The master image maker Domènec Umbert was given the job of restoring them and they were then given to the Terrassa Textile Museum, who took them out a few times but soon they had to be put away again.

They were finally recovered in 1997 and since then they have been looked after by the Coordinadora de Gegants i Bestiari de la Ciutat Vella, which has taken them to the giants' gatherings and musical street parades held during Barcelona's big festivals: Corpus Christi, Santa Eulàlia and La Mercè. Together with the new giants, they head the giants' exhibition held each year during the La Mercè festival, the Mostra de Gegants de Barcelona. And for a few years the custom of taking them out for Carnival, which was their festival in the early days, was also revived.

The old Casa de la Caritat Giants can be visited at the Palau de la Virreina, where they are displayed when they are not out on the streets.