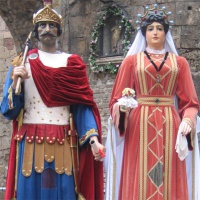 Built in 1906 by
El Arte Cristiano

Built in 1906 by
El Arte Cristiano

Roc and Laia, the old Plaça Nova St Roch Giants, are very different to the ones we usually see today. They are Roman figures, the classic, traditional kind. They represent nobles of Barcelona's Roman wall and figures from the Occitan city of Montpellier, where St Roch was born.

They are the hosts of the Plaça Nova festival, which takes place around St Roch's Day (16 August). This is a traditional celebration that has been held without interruption since 1589.

In 1905 the Plaça Nova St Roch Festival Committee, which had hired giants every year in the last third of the 19th century, decided to have some of their own made. They commissioned El Arte Cristiano, an image-making workshop in Olot, and they took their inspiration from the giants in that city. The two new giants made their first public appearance at the 1906 neighbourhood festival, in honour of St Roch, and they continued to perform there until the Spanish Civil War put a stop to it. The festival began again in 1939, though, and continues to this day. That's why we could say they are the oldest active giants in Barcelona. Since 1952 they have also danced at the La Mercè festival.

It was not until 1982 that they were named after the patron saints of the neighbourhood, Roc and Eulàlia (usually shortened to Laia or Laieta).

Roc and Laia have had their own dance since 1984: the Santa Eulàlia dance. It is an anonymous tune from the 18th century. Although they used to go out with a flautist and a drummer, these days they are accompanied by the Pessigolla shawm players.

The giants that usually go out today are much bigger replicas that were made in the 1990s, in order to preserve the old ones. Since that time the originals have been kept at the Casa dels Entremesos cultural centre, in a glass case to maintain them in optimum conditions because of their age. They only come out for the Sant Roc festival and Laia also takes part in the Laias procession on 12 February.

The Plaça Nova Giants have a classical, serious look. That means they fit in at any giants' retinue, parade or procession. Since their creation they have given all kinds of performances, in Barcelona as well as the rest of the Principality, North Catalonia, the Valencia Region, Andorra, Occitania, France and even Japan.