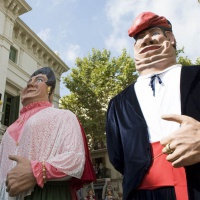 Built in 1977 by
Miguel Marcet

Built in 1977 by
Miguel Marcet

There is something unusual about the Old Giants or Two-faced Giants of Sarrià: they represent two different couples, one in front, one behind. On one side you have a smartly dressed lady and gentleman from Sarrià. He is wearing a traditional Catalan hat, the barretina, while she is wearing a tiara and holding a fan. On the other they symbolise the working class, with him wearing work clothes, while she is dressed simply and has a bundle in her hand.

They appeared in 1977, when the restoration of democracy brought a revival in popular culture. It was fashionable then for each Barcelona neighbourhood to have its own representative giants and Sarrià was not going to be left out. Miguel Marcet made them to represent the workers and the bourgeoisie, which is why they have two faces.

They were two of the biggest and heaviest giants in the city and used to take part in the neighbourhood's parades and celebrations until they were stored away and forgotten. Then, in 2008, their heads were found when a building was being demolished and handed over to the Colla Gegantera de Sarrià, who decided to bring them back to life.

Replicas of the two-faced giants were introduced at the Roser Festival in October, 2010. They are an adaptation of the originals made by the sculptor Jordi Grau at the El Drac Petit workshop. Although the heads and hands are identical, their clothes are different to give them a more modern look. They are also broader and shorter, to make them easier to carry.

At the neighbourhood festival in 2011, local residents took part in a public vote to give the giants a name. Martí and Elisenda were the names chosen for the wealthy farmers, Benet and Roser for the workers.

The replicas of the two giants are on permanent display at the Sarrià-Sant Gervasi district offices, together with the new giants, a smaller giant called Blauet, the neighbourhood big head and another giant, Trenot. They only go out to take part in the Sarrià annual festival and any parades or gatherings in the city they are invited to, when they are always accompanied by the Colla Gegantera de Sarrià.