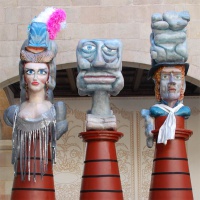 The Three Chimney Stacks of Poble-sec date from the end of the 1980s and show a break with the more classical concept of a giant. They combine human and architectural features, all based on elements that can be identified with the neighbourhood.

Their bodies take the shape of one of the images that most typifies Poble-sec and Paral·lel, the three chimneys, but these are topped by human heads. So they are three different characters: Paral·lel is a music hall presenter, Paral·lela is a chorus girl and Sec represents the smoke from the power station in the area. Something else that is different about them is they have two faces, one with distinct human features and the other with lots of smoke.

The local Scouts group, the Associació de Nens i Nenes Escoltes del Poble-sec, pushed for them to be built and the job was given to the El Molino scene-shifters. They were christened on 1 April 1989 outside El Molino, with the popular cabaret star Merche Mar acting as their godmother. Later that year they debuted at the La Mercè festival, where they caused a stir because of the innovation they brought to Barcelona's festival imagery.

The Three Chimney Stacks have represented the neighbourhood at all kinds of parades and festivals in the city, always accompanied by the local giant-carriers, the Geganters i Grallers del Poble-sec. Later the parade group added Armand from Montjuïc and Rosa from Paral·lel to their number. They all host the annual giants' gathering in the neighbourhood, which is one of the events at its annual festival in July, around St James' Day. That's when you can see them doing their dance, composed by Xavier Muixench.