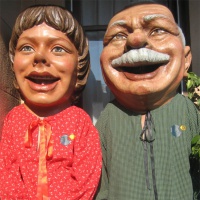 The Avi and the Nena are two capgrossos linked to the Coordinadora de Geganters de Barcelona, which they have been part of since 2006. Their smiling, friendly faces represent those of a little girl (nena) with short hair and a bald old man (avi) with a grey moustache.

They belong to a group of 41 pairs of identical capgrossos that the Agrupació Mútua gave to all the Catalan county capitals on their anniversary. They were made in 2001 at the Sarandaca workshop.Barcelona City Council immediately decided to give them to the Coordinadora de Geganters de Barcelona, which looks after them today and takes them out for walks when required.

In fact they only go out now and again. They take part in children's activities at some schools in the city and you might have see them on the odd occasion at the La Mercè parade.