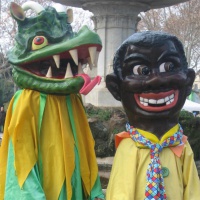 Català, Drylus, Kiku and Gall are capgrossos linked to the Sagrada Família neighbourhood. Four "big-head" figures that represent very different characters, with different origins, but who today go out together and are always carried by the youngest members of the group.

Català was made by Domènec Umbert in 1982 and made his first appearance that year on Carrer de Sant Quintí. The initiative to make him came from the Sant Josep de Calassanç parish colla, who were also responsible for the two gegants, Quintí and Peguera, and two macebearers, the Capgrossos Macers. Over the years his regular outings meant he was the worse for wear and a few years ago he had to be restored. That job was given to the giant-maker Francesc Cisa.

Drylus represents a young dragon, who is painted in vivid colours and has a big, gaping mouth showing his sharp teeth. They say he came to Barcelona to visit his cousin, the Park Güell dragon, and he liked it so much he decided to stay. He always goes out with another capgròs, Kiku, an African boy with a big smile on his face. He seems very happy and is about to eat the big lollipop in his hand.

Last, but not least, there is Gall, the little rooster of the family. He never misses a capgròs outingand, as he is so small, the little boys and girls carry him. The last three of these capgrossos are part of a series by an unknown artist that the group bought in a shop.

Català, Kiku, Drylus and Gall are currently carried around by the Associació Fal·lera Gegantera de la Sagrada Família, who, among other festival figures, look after and take out the gegants and gegantons of the Sagrada Família and Sant Josep de Calassanç groups as well.