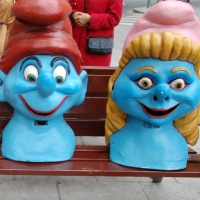 This smurf couple are linked to the Colònies Pare Turull. They are both blue and wear a traditional red barretina, while their sweet little faces with children's features look like they have been lifted from a fairy tale.

The two capgrossos were initially made to liven up the activities the Escola Pia Fathers organised at their youth camp house in the Pineta Valley, Huesca, as well as introduce the children to the world of festive imagery, so they could carry figures that did not weigh very much.

The job of making them was given to the image-maker Domènec Umbert, his first commission after he took up making giant figures again. They were finished in 1980 and appeared at the colònies that summer.

The barrufet and the barrufeta take to the streets every year for the festivals in El Clot, El Camp de l'Arpa and other Barcelona neighbourhoods, when they are usually joined by the Colònies Jordi Turull and Sant Josep de Calassanç giants. Today it is the youngest members of the Colla de Geganters i Grallers del Barri de Sant Antoni who walk and dance them at the parades and giants' gatherings they are invited to.