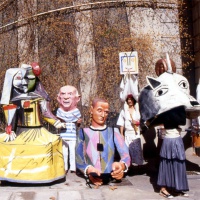 The Comparsa Visca Picasso consists of eight figures that represent well-known elements and characters from the career of this famous painter. This work includes two ‘gegantons’ or small giants, Menina and Arlequí, and a mask that represents the work ‘Three Musicians’. There are also three small ‘gegantons de motxilla’ (small giants carried like a backpack) which represent works from this Malaga-born painter: Faune, the Woman of Boisgeloup and the Horse of 'Guernica'. The comparsa is complemented with two ‘capgrossos’ or big heads: the Bull from Guernica and Pablo Picasso himself. His carrier always has a brush and a palette in his hands.

The whole comparsa is the result of a process of reinventing the city's festival figures - the gegants, the capgrossos and the bestiari, or beasts - and creating figures that broke with the traditional models of festival imagery. It was held in commemoration of the centenary of the birth of Pablo R. Picasso and was first presented at the La Mercè festivities in 1981. Barcelona City Council commissioned the artist Jordi Joan Guillén to make all of them, as part of the renovation process.

The figures were restored in 1997 because their supporting structures made them very difficult to hold up and dance with. Since then, young members of the Associació de Geganters de les Corts have taken charge of carrying them everywhere, even though they belong to the Barcelona City Council and Culture Institute. The Comparsa Visca Picasso played an active part in the La Mercè, Nou Barris and Les Corts festivals for a long time but in the last few years have stopped appearing and can now only be seen at the Nou Barris Library, where they are permanently displayed.