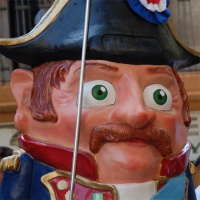 Built in 2011 by
Xavier Jansana

General Lagarto is a dwarf and the latest addition to the Barceloneta's colla gegantera. He was built to mark the 20th anniversary of the two giants in the group, Pep Barceló and Maria la Néta, and dedicated to the children of the neighbourhood. He has the features of a child and represents a decorated general, sword in hand and ready for battle.

The general is a figure directly linked to one of the most authentic activities in the Barceloneta annual festival: the sortida del canó. Every year for the Sant Miquel festivities, a local man dressed up as a Napoleonic soldier goes round the neighbourhood's streets with a festive cannon that fires sweets. General Lagarto's attire – a Napoleonic hat with a blue, white and red rosette, a dress coat and sash – looks a lot like the festival outfit worn by the man firing the cannon.

The Associació de Geganters, Grallers i Bestiari de la Barceloneta came up with the idea of General Lagarto when they were thinking of a figure that could be carried by the young children belonging to the association, those not yet ready to carry the small giants, the gegantons. So they commissioned the artist Xavier Jansana, who had already made the other figures in the neighbourhood comparsa, to make him.

General Lagarto was introduced to the public in October 2011 at a big festive event to mark the 20th anniversary of the Gegants de la Barceloneta. He was christened at a ceremony officiated by the capgròs ("big head")Msgr Filomeno, with his fellow dwarfsCu-cut from Plaça Nova and Manolito from Raval there as godparents.

Although he has only been around for a few years, he has already taken part in the main Barcelona festivals – La Mercè and Santa Eulàlia – and it is very common to see him at parades and gatherings in other city neighbourhoods, usually accompanied by the other Barceloneta figures. When he is not out and about, he can be visited at the Casa dels Entremesos, where he is displayed with other figures belonging to Ciutat Vella's festive imagery.