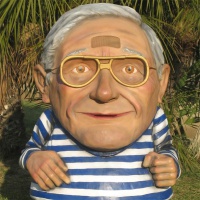 Manolito is a friendly little dwarf associated with Plaça de Sant Just. He represents an elderly gentleman with grey hair and wears a blue-and-white striped shirt. He belongs to the Raval comparsa, along with Lola, Sr Ramon and the gegantona Quimeta Àngels.

The idea of making Manolo came from the Associació d’Amics dels Gegants Ramon i Lola. After acquiring Quimeta Àngels, they decided to expand their group with a smaller figure that could be carried by the boys and girls in their association. They gave the job to David Garcia Llorca from Constructors de Fantasies, who finished their nan in 2002.

Manolito del Raval made his public debut that same year and since then he has been a common sight at gatherings and parades in the neighbourhood and around the city, often accompanied by Lola, Ramon and Quimeta Àngels.