At the start of 1986, some members of the local residents' association set up the Diables del Poble Sec. Immediately they had the support of the Diables del Raval, who were their godparents for their baptism and first outing, at that year's local annual festival. Slowly the new colla established themselves, eventually leaving the residents' association and becoming closer to the Agrupació de Nois i Noies Escoltes. They shared a centre with this scout group on Carrer de la Concòrdia, at a time when they were experiencing a big growth in membership. Out of their relationship with the scouts came the Gegants del Poble Sec. The diables were involved in creating the giants and organised their first dances.

For a while the group were inactive but gradually, led by Cristina Velasco, they started up again, beginning with the youth section known as Satan's children, Els Fills de Satan, a name they adopted from one of the characters in the cartoon series Bola de drac.

The tabalers are another part of the group, set up at the same time as the diables and who accompany with their drums. Their drumbeats are based on traditional percussion, though they have evolved through fusion and now incorporate styles from other cultures, such as taiko, samba-reggae and African foli.

Two gatherings of the Coordinadora de Colles de Diables i Bèsties de Foc de Barcelona have been organised in the neighbourhood by the Diables del Poble Sec: one in 2002 and the other in 2009. Since 2003 a gathering of fire jugglers, malabars de foc, has also been organised in Poble Sec, as well as an exhibition of devils' sceptres, or ceptrots.

Aside from performing at the city's main festival, La Mercè, the Diables del Poble Sec also appear in other parts of Barcelona. Their children's section takes part in the Festa dels Súpers, organised every year by the Catalan channel TV3, and the children's festival organised by the Diables de Nou Barris. To mark their 25th anniversary, the group unveiled two new figures, the billy goat, Mascle Cabró, and a female devil known as La Diablessa, in addition to "Hell's Door", El Porta de l'Infern del Poble Sec. 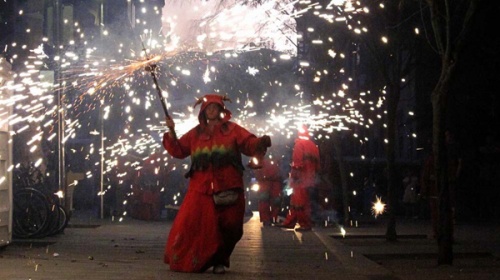 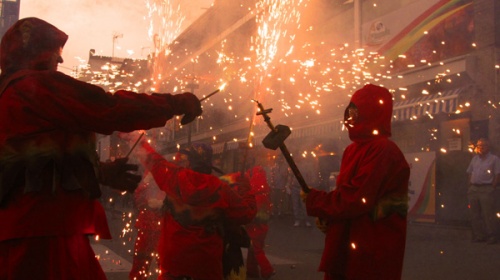 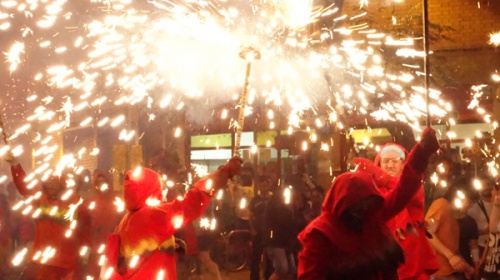