The Diables del Poblenou were born in the 1980s, when the children's entertainers Gripau Blau decided to become a colla de diables, a devil group fully involved in fire entertainment.

From the beginning they have been split into two sections, the fire section and the musicians, in other words, the drummers who accompany the devils in their performances.

The members of the group wear black trousers and a black hooded jacket with flashes of bright colours on the legs and sleeves. Their current outfit, designed and made in 2009, is finished off with two red horns on the hood.

The main correfocs (fire runs) they take part in are those at the Poblenou and La Mercè festivals. During their neighbourhood festa major they organise some other activities as well, including a concert, verse readings and Kaspa Saturday Fever, a procession of decorated floats. Since 2003, on the fourth weekend after Easter, they have held an event called the Cursa de Sant Pollastre, the "Holy Chicken Run", which combines the fire element with other activities and involves local residents.

The Diables del Poblenou have always been involved with the neighbourhood's associations. For example, they work with the Centre d’Imatgeria Festiva de Can Saladrigas, the centre that looks after the giants and other festival figures, and the Coordinadora d'Entitats del Poble Nou, the body that coordinates the neighbourhood associations. They also organise the Carnival celebrations. 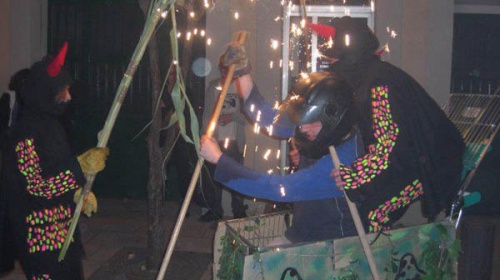 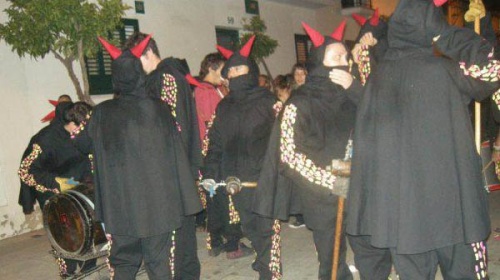