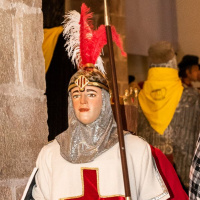 Built in 2016 by the Ventura & Hosta workshop

The Sagrada Família giant troupe saw an addition to the family in 2016: a little giant named Sant Jordi. This little figure from the Ventura & Hosta workshop was donated by a family who are members so it could be carried by the children in the group. Together with another little giant, Míliu, he has his own dance, “El Vermut de la Sagrada Família”, with music by Fernando Landín.