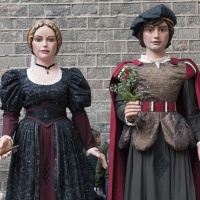 They are the creations of the master image-maker Toni Mujal, who made them especially for young children, so they could carry them and join in the giants' processions. The figures were presented in November 2014. Alfons, in fact, is the only character that is new, as Isabel had already been around before she was given a complete remodelling.

The little giant is the infant Alfons el Franc, who was the king of the crown of Aragón and the Count of Barcelona from 1285 to 1291. He is dressed in the traditional clothes of a nobleman from the 13th century –ornamented shirt, a long cloak and a slanting cap– carrying a bunch of wild herbs in his hand.

Alfons is the older brother of Isabel, who was the princess of Aragón and later, from 1282 to 1325, the Queen of Portugal. The new little giant replaces the one from 2003, created by Jaume Castells, the former head of the giants'-procession group and the promoter behind the movement to reclaim Sant Pere de les Puel·les' Giants. It was decided in this case that the entire little giant should be remade and given a new face as well as new cloths and features. Her hand bears a key in honour of St Peter, the parish's patron saint, who is usually associated with this feature.