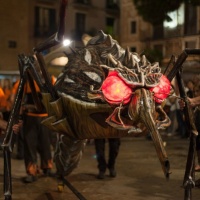 Constructed in 2012 by Eloi Martín

Can Baró's local residents maintain that it was in their neighbourhood that Barcelona’s first tiger mosquitoes were seen. Which explains why, when it came to choosing a festival beast for the Fures de Can Baró devils, the group opted for this species of mosquito which is especially fat and famous for its bites. The craft worker Eloi Martín was commissioned with constructing the beast in 2012 but it did not make its debut until two years later: for the neighbourhood's big annual festival in 2014.

The truly spectacular mosquito figure has thirty-three fire points distributed along its legs, wings, head and body. The Tiger Mosquito has the unique feature of being able to light up its fangs, and its most representative event is the Mosquitada de Can Baró.