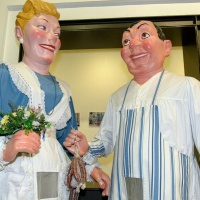 Built in 1992 by members of the Vallespir Street Festivals Commission

Built in 1992 by members of the Vallespir Street Festivals Commission

In 1992, the Vallespir Street Festivals Commission decided to build a couple of giants using the two big heads they had bought at El Ingenio. The craftspeople of the street festival made the giants some little wooden horses and the members of the commission took charge of clothing them. Two years later, in 1994, the figures were renovated by the religious images sculptor, Toni Mujal.

They are a tribute to the neighbourhood ‘s proximity trade, which is why they are inspired by two real people, the pork butcher Jon Vidal and the fishmonger Núria Rius. Nonetheless, they were christened Laia Espir and Tomeu Vall in honour of the patron saint of Sants neighbourhood, Sant Bartomeu

From birth, Tomeu and Laia have participated in the annual festival’s street parades and in the Sants-Les Corts Three Kings Parade. However, they were always made to dance by the giant carriers of the Friends of the Giants Ramon and Lola of Raval Association because they didn’t have any stable carriers of their own.

In 2013, the Festivals Commission handed responsibility for the giants’ maintenance and storage to this association, since when they have been exhibited at the Casa dels Entremesos.