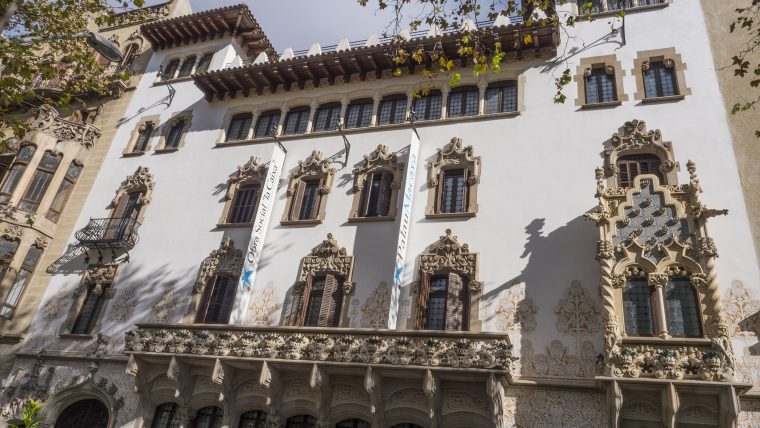 As with many other Modernista mansions, Casa Macaya was commissioned as a family home; in this case by the industrialist and businessman Roman Macaya Gibert. The Macaya family lived in the house until 1914, after which it had several owners until the ”la Caixa” savings bank bought it in 1947.

Declared a Cultural Asset of National Interest in 1973, Casa Macaya, with its imposing white stucco facade and stone sculpture, catches the eye of pedestrians on Passeig de Sant Joan. It was designed by the architect Josep Puig i Cadafalch, and its Modernista style, with Civil Gothic influences, is unmistakable even today, 100 years after its was built.

Commissioned by the industrialist Roman Macaya Gibert, Casa Macaya stands out for its architectural beauty and the contrast between the apparent simplicity of its white facade and the lavish stone decoration of the windows. The stone sculptures are the work of Puig i Cadafalch’s regular collaborators, Eusebi Arnau and Alfons Juyol.

The evolution of a space

The outstanding features of the interior are the big stone arches and the ornamental staircase with floral motifs that used to lead to what was the main house of the Macaya family until 1914. Today the building, which is also known as Palau Macaya, serves as a social and sustainability centre of ”la Caixa”, who acquired it in 1947.

Sections from this amenity