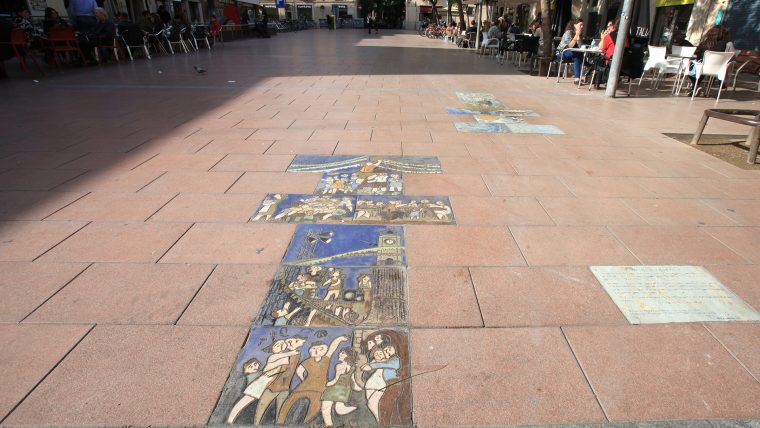 This small square lies in the heart of Gràcia, between Carrer de Ramón y Cajal and Carrer de Terol, a thoroughfare for many local residents that is full of bars and restaurants, and has one of the city’s best ice-cream parlours. It used to be named after the Queen of Spain, Isabel II, in the latter half of the 19th century. But when she was overthrown, it was renamed Plaça de la Revolució.

A square with lots of names

It is so close to Mercat de l’Abaceria, on Travessera de Gràcia, that it has long been popularly known as Plaça del Mercat (Market Square). During Franco’s dictatorship it was renamed Plaça de la Unificación (Unification Square) but recovered its old name back in the 1980s. Originally it was an unpaved square but now it is paved with reddish slabs and has a children’s play area always full of kids. A notable feature is the hopscotch mosaic unveiled in 1997, during Gràcia’s annual festival, which is like a route through the traditional images of the festa major.

When the square was remodelled in 1995, an air-raid shelter from the Spanish Civil War was discovered there, hidden away in the subsoil. Only a small area of its infirmary remains, which can be accessed from the fourth floor of the car park.