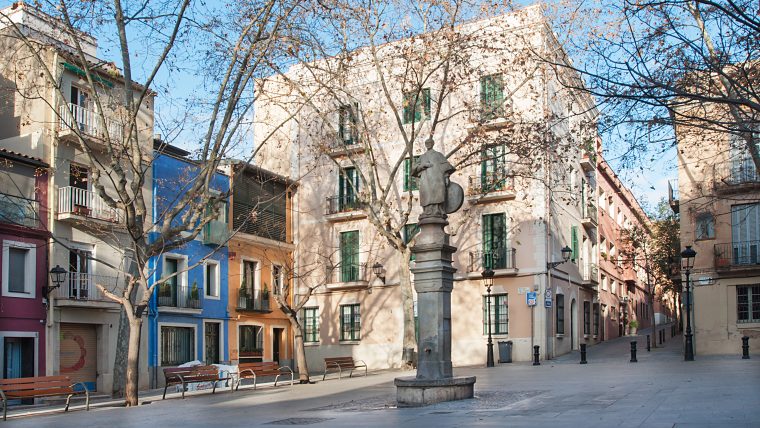 It was known as Plaça de la Unió until 1888, and in the middle of the square there is still a fountain topped by a statue of Sant Vicenç. It is a small, well-designed square surrounded by trees. It has a welcoming atmosphere and it has often been used as a film set for advertisements.

Plaça de la Unió used to be the centre of the neighbourhood around the train station. The Barcelona-Sarrià line, which dates back to 1860, is the second oldest railway line in the Iberian Peninsula and the third oldest in Spain. One curious feature is the building on the corner with Carrer de Cornet i Mas. This used to be the Institut Colon, a prestigious secondary school which then had the young nationalist politician Francesc Cambó as one of its teachers. Nowadays the building houses a nursery school. It has been an educational centre for over a hundred years.

The most picturesque square

The stone statue of Sant Vicenç has presided over the square since 1896. It used to be opposite the Vila de Sarrià church. The name of its sculptor is unknown, but it has been attributed to Nicolau Travé, who worked in Barcelona in the second half of the 18th century.

Nowadays, Plaça de Sant Vicenç is one of the nicest, quietest places in the city. It is also one of the favourite scenes for local and visiting artists.