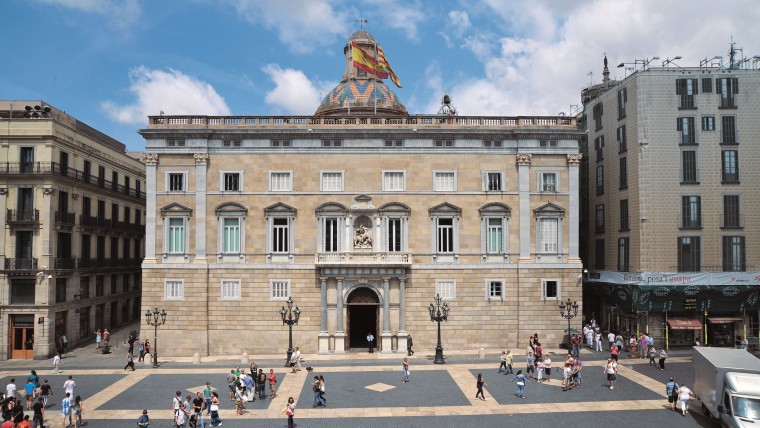 With 2,000 years of history behind it, Plaça de Sant Jaume is now the site of the Palau de la Generalitat, seat of the Presidency and the Catalan Government (on the northern/mountain side) and the Casa de la Ciutat, or City Hall (on the sea/southern side). When Barcelona was known as Bàrcino and was a Roman province, there was a forum in this square, dominated by a temple dedicated to Emperor Augustus.

Where it all began

The two main buildings in Plaça de Sant Jaume are where many of the decisions are taken that affect the lives of the citizens Barcelona and Catalonia. On one side is the Palau de la Generalitat, with the statue of St George on the balcony, built in the 15th century. On the other is the Clock Building, City Hall, with its Neoclassical facade and statues of James l and the councillor, Joan Fiveller, flanking the entrance.

The Palau de la Generalitat is an eminently Gothic building that for the most part maintains its original appearance. The two side facades are Gothic but not the main one, which came later and is in the Renaissance style of the Palazzo Farnese in Rome. The Golden Chamber and the Orange-Tree Courtyard are also Renaissance, while the four columns at the entrance date from the 2nd century and come from a Roman temple in Tarragona. The Staircase of Honour and the statue of Sant Jordi (St George) on the facade were added in the 19th century.

As for City Hall, the Casa Gran, this dates back to 1369, when a start was made on the Saló de Cent, the Hall of One Hundred, to provide the councillors with a public building. The Gothic facade on Carrer de la Ciutat is still there, while the main, Neoclassical facade was built in 1847.

The core of the city

Plaça de Sant Jaume beats in time with the city. As well as having the two institutional buildings, it is an important public meeting point, where human-tower ( castell) displays and concerts are held during the annual Mercè and Santa Eulàlia festivals, a Nativity scene ( pessebre) is set up at Christmas and many demonstrations and rallies take place. It is also common to see newlyweds coming out of City Hall when they have just got married.

Leaving the square, a very short distance away are the Cathedral, the Rambla, the Boqueria and the Born, to mention just four iconic spots.