On 25 March a meeting will be held in Trinitat Vella to discuss employment, unemployment and basic income at a time when Iniciativa Cultural Baja a la Plaza (Take to the Streets Cultural Initiative) is taking shape. In this new “take” the job insecurity of Las Kellys is on the agenda with a proposal to create a campaign map to renounce the abuse and job pressure that this group is subjected to. If cartography has always connected power and territory, the adoption and subversion of this practice allows us to create counter-propaganda elements for the purpose of transforming socially unfair realities.

The activity is linked to Sunday Every Day, a project by Julia Montilla, which is part of the In-Transition-Work exhibition, on display on the second floor of the Art Centre.

The other face of tourism in Barcelona
The latest labour reform has made it possible for a hotel to outsource part of its production process. In addition, these outsourcing companies are not tied to collective bargaining agreements. Many hotels use the subterfuge of outsourcing to pay hotel maids much less. Thus, the huge profit made by the hotel sector in the summer of 2016, its best on record, has its counterpart in labour exploitation, loss of rights and the loss of millions in social security. To condemn this situation, the group of workers who undertake these cleaning jobs –clearly f 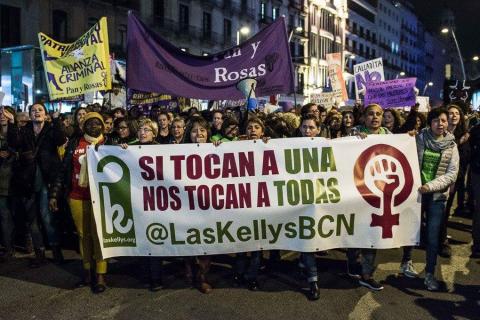