Sold out tickets Hand program
An iconoclastic and charismatic choreographer, author of some ferocious productions, she explores three scenes, those of punk, pop and African rumba, in a trilogy that is represented in two sessions and it will be seen in Europe for the first time.

There are no barriers in terms of crossing disciplines in the creations of nora chipaumire, a performer who is difficult to classify. She mixes voice, text, installations, audio visual projections ... And with this diversity of languages, she presents, divided in two days of representation, a triptych inspired by its training years in the Zimbawe of the 70s, 80s and 90s. She reviews three musical styles, always with the body as protagonist and with three great figures in the background: those of Patti Smith, Grace Jones and the Congolese musician Rit Nzele. On Monday, July 8, at #PUNK (pronounced "Hash tag Punk"), and with the audience standing around artists as if it were a concert, she will explore, together  with the author of Horses, the rejection of this musical genre to the status quo and wonder if there really is a future or if the future is, simply, what we live today. Everything, in a Do It Yourself scenario is reshaped and taken apart over the evening... After a pause of half an hour, we will be able to see the second part of the trilogy. Grace Jones is the centre of a soliloquy starring a girl who discovers the music and the figure of this singer born in Jamaica. The idea of a cover is at the centre of 100% POP ("One hundred per cent pop"), the second part of an unclassifiable show.

#PUNK 100%POP *N!GGA was co-produced by The Kitchen, Crossing the Line Festival and Quick Centre for the Arts at Fairfield University.

Major support for 100%POP has been provided by the Fondation d’entreprise Hermès within the framework of the New Settings Program.

Additional support for the trilogy has been provided by the Guggenheim Foundation, Institute for Creative Arts at the University of Cape Town, Mid Atlantic Arts Foundation and American Dance Abroad. 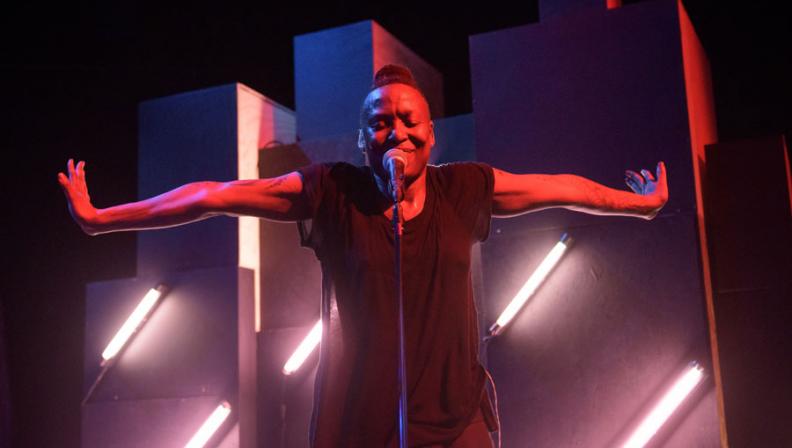