Buy tickets
The courtyard at the Nou Barris District headquarters is to become a flamenco-focused venue for presenting a festival first established in 2000 and currently managing the El Dorado Barcelona association.

The artists Vanesa Aibar and María Marín present Certidumbres, a show starring Aibar, a bailaora [flamenco dancer] and creator from Jaén based on flamenco and Spanish dance to create modern, free dancing. It features the cantaora [flamenco singer] and guitarist María Marín, born in Utrera, trained in classical guitar in the Netherlands and an artist with an open approach to flamenco, who has collaborated in jazz, classical-music and world-music projects. You may have seen her collaborating with big international artists, such as Carles Benavent, Tomatito, Antonio Serrano and Javier Colina.

As for fringe activities, the festival has a series of offerings planned for that same day, Saturday, 23 July, ranging from the flamenco-based Cronexiones (at noon) improvisations, an initiative from the dancer, choreographer and educationalist Ana Pérez and the choreographer and dancer Pol Jiménez, to the delightful encounter between Juan Carlos Lérida’s extremely innovative forms of flamenco and Marina Monsonís’s gastronomy-applied performing arts in La hora del ritual (1.00 p.m.). On Saturday, 23 March, the bailaora [flamenco dancer] Karen Lugo will be offering us a family version of her show Lotería (5.00 p.m.), combining flamenco cante [singing], baile [dancing] and music. In addition, there will also be an installation during the festival for watching a selection from the El Dorado audio-visual archives.

PLEASE NOTE: Tickets for this performance will also include admission to the concert De cerca, featuring Josemi Carmona, Javier Colina, Bandolero and Pepe Habichuela, at 10.30 pm. 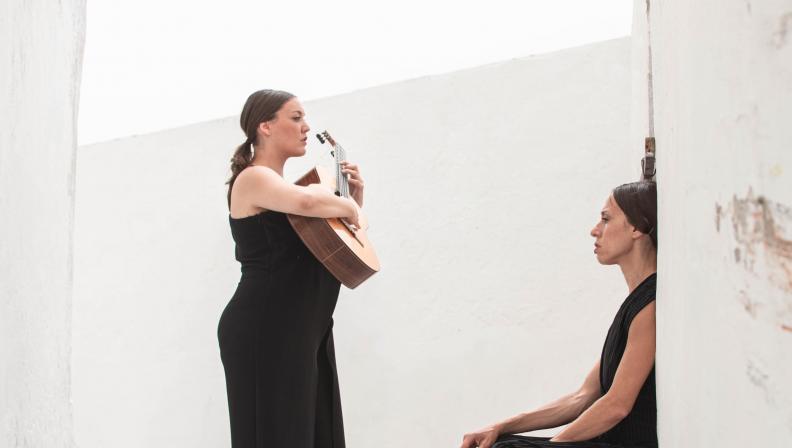