Per àrea de Govern
Per districte
Per tema
Accedeix a 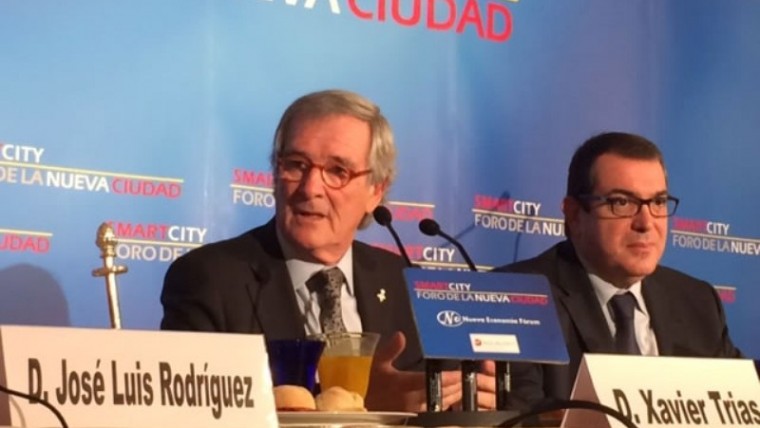 This Thursday, the Mayor of Barcelona, Xavier Trias, was the guest at an information breakfast entitled "SmartCity. The New City Forum’, organised by Nueva Economía Fórum at a hotel in central Madrid. Xavier Trias championed Barcelona’s efforts to become an international Smart City benchmark, where new technologies are put at the service of its residents and for running the city and improving public services.

During his speech, the Mayor explained that Barcelona and Madrid were two cities with great futures ahead of them, which ought to be working together “as big cities and their metropolitan areas are the ones that have the potential these days to get us out of the crisis”. He then continued that “we are experiencing difficult and decisive moments”, adding that 2014, although marked by the social and economic crisis and the state’s political model, would be a year that focuses on the Right to Decide referendum and a solution to the Catalonia-Spain relationship. He then insisted that “we will never hold a referendum that is not legal”. He remarked that this did not amount to “not holding one”. The Mayor argued for dialogue and added that the referendum was “a democratic expression that is not aimed against anybody”.

Barcelona, a launchpad Mayor Trias then explained that Barcelona had always been generous with its surrounding area and that it would be the launchpad for economic recovery not just in Catalonia but in Spain too. The Mayor affirmed that, in spite of an initial improvement in the economic area, Barcelona needs to urgently reflate its job market and create employment. Barcelona, he said, was economically attractive, a city that was open to the world. Since its grand transformation for the Olympic Games, it had become a major international tourist destination, and that “now, we want it to be known as a city of culture, knowledge, creativity, innovation and well-being”.

The Mayor explained that at the start of its mandate, the municipal government’s objective was to “be credible and generate trust at an international level, which means being solvent and not generating financial deficit”, in order to tackle their first priority: caring for people. He explained that to achieve this priority, the budget for social policies had to be increased. The Mayor explained several operations in this area, and stated that “caring and social policies are not an expense, they are an investment in the future”. Mayor Trias added that these policies had to be promoted in collaboration with the Third Sector.

The municipal government’s second priority, he said, was economic reflation and job creation “because there is no social progress without economic progress. We must ensure that Barcelona’s success is everyone’s success”. Barcelona has a diversified economy, with industry, and sectors that are traditionally very competitive, such as commerce and tourism – at this point Mayor Trias insisted on the reclaiming the VAT generated by tourism-, it is a city hub for logistic economic activity, with access to the main markets in Europe, the Mediterranean, Asia and Latin America, and it has a major logistic platform, with its Port, Airport, Zona Franca, Mercabarna, Fira de Barcelona, all of which are showing excellent results.

The example of Les Glòries

Mayor Trias explained that the city had made great efforts to become an international Smart City benchmark, where new technologies had been put at the service of the people and for managing the city and improving public services, “We are designing a model of a city of the future, with productive neighbourhoods with zero emissions, and places laid out to a human scale”. Mayor Trias explained that, for example, the transformation of Plaça de les Glòries gives form to this model. He said that the city had undertaken improvements that had a great impact on the general public and major transformations that aimed to “bring the maximum urban quality to all the city’s neighbourhoods and improve the quality of people’s lives”. Mayor Trias emphasised that although there were investments for the future, like the new road and rail access points to the Port de Barcelona which are already underway, there are things that still have to be resolved, like the La Sagrera station, “a strategic project for the future, not only for Barcelona, but for Catalonia and the rest of the state”, and Sants station, “saturated and pending enlargement”. The Mayor explained he would be meeting with the Minister of Public Works to discuss these matters in depth, as well as the railway link to the Barcelona Airport T1, “it is inconceivable that in an international airport you have to get off the train and get on a bus to reach the terminal”; and Line 9 of the metro.

Culture and sport as creators of wealth Mayor Trias also explained that Barcelona was making major efforts in sectors such as culture and sport, important creators of wealth. The Mayor finished his first speech by affirming that more collaboration was needed between cities, in Catalonia, in the rest of the state and the world, to overcome the crisis. “By collaborating with cities like Madrid, Barcelona, through its Metropolitan Area, is in a position to lead us out of the crisis”.

In the following conversation, Mayor Trias referred to the referendum. He insisted that “we have to know what the people think” and that “it would be a mistake to block the referendum”. He supported dialogue and rejected certain attitudes that seek confrontation. As for the meetings that he will be holding with Spain’s various ministers, the Mayor affirmed that he would be telling them that “choosing Barcelona is a guarantee of success”.

The Mayor was presented by Jordi Jané, fourth vice-president of Lower House of the Spanish Parliament, who described Xavier Trias as a person with a capacity for dialogue and a great vocation for public service. The event was attended by other public figures, including the Mayor of Madrid, Ana Botella, the Spanish Secretary of State for Telecommunications and the Information Society, Víctor Calvo-Sotelo; members of the consular body and various Catalan members of parliament and senators.