The new L10 Sud metro line came into service on 8 September connecting the neighbourhoods of La Marina with the rest of the city, with five stations along the 4.5 km line. The new section includes two new stations, Foc and Foneria, in the district of Sants-Montjuïc, and three stations in common with the L9 Sud line (Can Tries / Gornal, Torrassa and Collblanc), in L’Hospitalet de Llobregat.

The improvement to public transport in the neighbourhoods of La Marina de Port and La Marina del Prat Vermell is now a reality, with a completely accessible and adapted line linking to lines L1, L5 and L9 Sud and trains passing at intervals of 7 minutes 20 seconds on working days. At the stations shared by the L9 Sud users will need to check information on the screens above the doors on the platform to see which line trains correspond to.

The new L10 Sud also follows the model of driverless trains already being used on the L9 and L10 lines, with an automated system which improves efficiency and is managed from the metro control centre. Even so, all stations have staff on hand to help users and handle any problems.

The opening of the new Foc and Foneria stations represent 6,253 ticket uses per day. In addition, between the L9 and the L10 the number of metro users will grow to 29.5 million a year. This increased use of the metro equates to an estimated 1,438 fewer vehicles on the road network, meaning a cut of 975 tonnes of carbon dioxide emissions a year. This helps towards more sustainable mobility, improved air quality and, in turn, the quality of life of Barcelona residents.

The extension to the metro network along Pg. Zona Franca helps achieve more equal and cross-cutting mobility, making for a more connected city. The L10 Sud line will continue to grow with the addition of the Provençana and Ciutat de la Justícia stations, due to open in February and October 2019 respectively. This future extension will also see the line connect with the L8.

Connections with the new L10 Sud

The connection with the L9 Sud will be possible from any of the three stations of Can Tries / Gornal, Torrassa and Collblanc, enabling users to get from Zona Universitària as far as the airport.

To connect with the L1 line, users will need to change at the Torrassa station. The journey time from Foc to Catalunya will be around 25 minutes.

The connection with the L5 line involves changing in Collblanc. The journey time between Foc and Sagrada Família will be around 30 minutes.

What other lines connect with the L10 Sud?
Initially, the L10 Sud has connections with the L9 Sud, the L1 and the L5. Once the Ciutat de la Justícia stop is operative, the line will also connect to the L8.

How often do trains run on the L10 Sud?
Trains will run every 7 minutes and 20 seconds on working days.

Will I be able to use the L10 Sud in a wheelchair?
Yes, all stations and trains on the L10 Sud are completely adapted for use by people with reduced mobility.

How do I get to the centre of Barcelona on the new L10 Sud?
By changing to the L1 line in the Torrassa station and getting on any train going in the direction of Fondo. There are eight stops between Torrassa and Catalunya.

How long does it take to get to Plaça de Catalunya on the new L10 Sud?
From the L10 Sud metro station of Foc the full journey time to the centre is 25 minutes, including the change at the Torrassa station.

How long does it take to get to Sagrada Família on the new L10 Sud and how do I get there?
It takes 30 minutes to get from Foc to the Sagrada Família station. You need to change to the L5 line in Collblanc.

How do I tell the destinations of the trains going through the stations shared by the L9 Sud and the L10 Sud?
You need to check the information screens above the doors on the platforms in the stations of Can Tries / Gornal, Torrassa and Collblanc.

Can I get the L10 Sud at night?
The operating times for the L10 Sud are the same as the rest of Barcelona’s metro lines:

Who drives the trains on the L10 Sud?
Like the other automatic lines in the city, the L10 Sud uses driverless trains. All trains are controlled and programmed by the metro control centre. There are also staff on hand at stations to attend to people and resolve any problems.

Is the automatic metro system with driverless trains safe?
The cutting-edge technology used to control the circulation of trains on the L10 makes for a more reliable and regular service, at the same time reducing the possibility of human errors. All the stations on the line are also equipped with platform doors to prevent anything or anyone accidentally falling on the tracks. 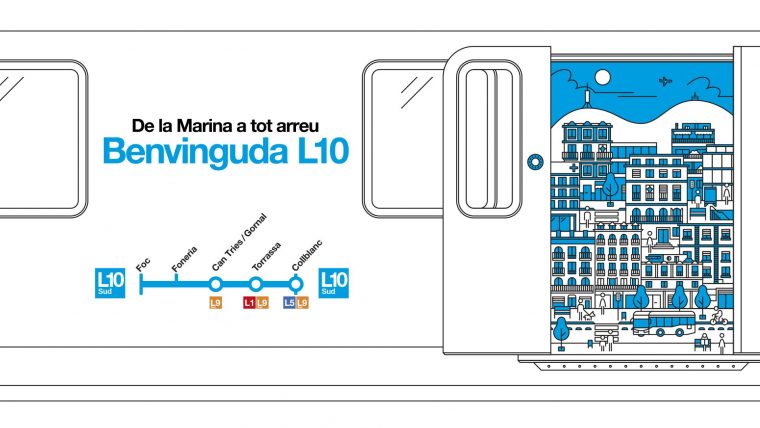