Opposition proposals from the full council meeting of 29 April 2020

Four opposition proposals were approved in April’s full council meeting: one from the ERC to bolster social services, two from JxCat and the PP relating to the Barcelona Agreement, and one from BCN Canvi to set up a working group between the city councils of Barcelona and Madrid to work towards the economic recovery after the Covid-19 crisis. 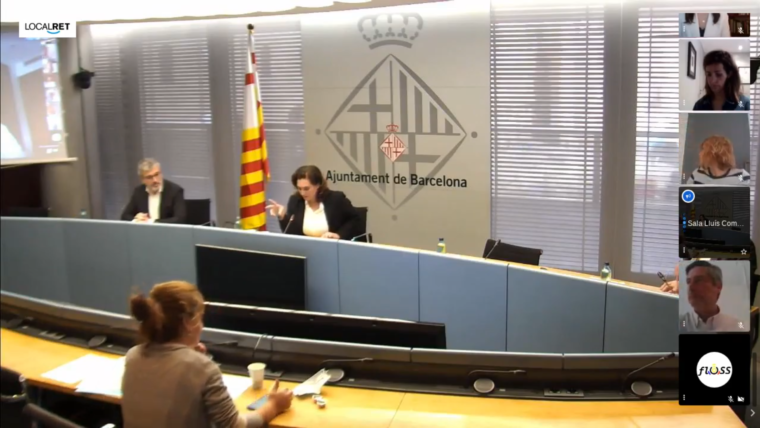 City Councillors took part in the full council meeting online and were able to contribute and vote from home. This format is one of the safety measures established during the state of emergency for Covid-19.

Esquerra Republicana de Catalunya put forward a proposal urging the municipal government to take measures to bolster social services in the city by strengthening existing centres, increasing the number of offices and providing more phone support to tackle the emergency. All municipal groups gave their support to this proposal.

Junts per Catalunya put forward a proposal on the guiding principles for the Barcelona Agreement, which the municipal government presented at the meeting. The agreement will be a cross-cutting document, compiled through consensus with the city’s economic, social, cultural and sports networks and seeking the economic and social recovery after the health crisis. The proposal was backed by all groups.

The proposal from Ciutadans was also related to the Barcelona Agreement, calling for it to include the review and amendment of tax by-laws currently in force. The proposal was backed by Cs, the PP and BCN Canvi, but failed to prosper as the city government and ERC voted against it and JxCat abstained.

The Partit Popular proposed two measures for the Barcelona Agreement Board to get resources to tackle the socio-economic consequences of the Covid-19 crisis. The proposal was approved with votes from the municipal government, JxCat, the PP and BCN Canvi, while ERC voted against it and Cs abstained.

Barcelona pel Canvi call for a working group to be set up between the city councils of Barcelona and Madrid, with the Barcelona Metropolitan Area also involved, to work on the economic recovery after the Covid-19 crisis. The proposal prospered with BComú, the PSC, Cs and the PP all backing it, while ERC and JxCat voted against it.

Two institutional declarations were read out at the end of the meeting: