As from today, you can download the BCN Anti-Sexist app for free, which enables all citizens (women, trans and men) to anonymously show where and how attacks or assaults occur. 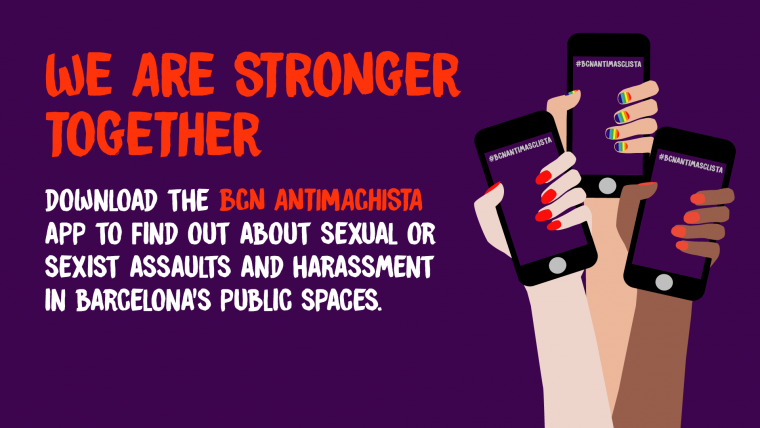 Thanks to the immediacy of the BCN Antimasclista app, real-time and non-speculative information can be obtained on where, when and in what conditions aggressions take place, as well as other relevant demographic aspects.

The data compiled will help to sketch out a map of the various types of assault, with more information on the possible emotional consequences of the people affected, and to plan changes in public spaces and policies to fight against this expression of gender violence.

In addition, the app has an option for directly calling 112, where users consider it necessary. However, people should bear in mind that the app cannot be used for reporting incidents, only as a tool for enabling citizens to interact and find out about sexist and sexual attacks and assaults occurring in the city’s public spaces. The overall goal is to work together on better intervention, stronger prevention, more empowerment of women and greater awareness-raising.

The raised fists that accompany the app slogan of “We are stronger together” come from the initiative “For All Womenkind”, an international campaign promoted by the feminist entity Fempowerment which was launched in 2016 to stand up for women’s rights. The image, designed by the artist Deva Pardue, is a call for union between women all over the world.

If you wish to report a sexual attack or assault you should go to a Mossos d’Esquadra police station. Municipal support services also have specialised staff in various units, such as:

Check out all services at http://ajuntament.barcelona.cat/bcnantimasclista/ca/serveis-datencio.

The latest known data on gender violence in the city of Barcelona in the social and family sphere by non-couples, which covers sexual assaults and attacks by known and unknown people and family members (who are not or have never been a couple or anyone from the working environment), show that 13.9% of women resident in Barcelona in 2016 have suffered sexual assaults or attacks . If sexual comments, gestures and exhibitionism are excluded, the figure comes to 6.8% of women.