Casa Tosquella, in the Putxet neighbourhood, to become a centre for the elderly

Barcelona City Council has reached an agreement with the owners to acquire this building in the district of Sarrià – Sant Gervasi. Built in the ‘modernista’ style, the Casa Tosquella is classed as a Historical Monument and Cultural Asset of National Interest and has been unoccupied since 2012. Local organisations have spent years pushing for the City Council to acquire the building for public use. 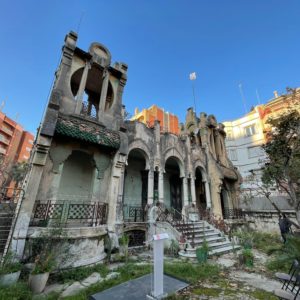 Besides satisfying the need for a facility for the elderly in the district, this acquisition is also in line with the desire to protect singular buildings and preserve their heritage value, given the building and its garden are both very run down at present through lack of maintenance.

House in a unique style

Casa Tosquella was commissioned in 1889 be the trader Antoni Tosquella and the master builder Juan Caballé as a summer house. The building was renovated by the architect Eduard M. Balcells i Buigas between 1907 and 1908. Balcells was one of the last modernista architects, and the freedom given to him by Tosquella in terms of both construction and budget led him to create an impressive work, with mainly modernista forms combining with Moorish touches and a unique style.

The building was recently added to the heritage red list to warn of its poor condition, prevent further deterioration and promote its recovery. The Casa Tosquella is also included in the Special Plan for Architectural Heritage and Catalogue for district 5, with a grade A protection rating (Cultural Asset of Natural Interest).

New facility for the neighbourhood of El Putxet i el Farró

The acquisition of the Casa Tosquella will allow it to be given a public use, once renovated. Given this classification, the location and the area it covers, the building would be ideal as a neighbourhood facility, specifically as a centre for the elderly. Another of the goals of the district is to be able to open up the gardens at the property to the public, thus gaining a new green space.

In terms of the location, it is worth noting that a new municipal facility in this property would help achieve the goal of connecting and providing cohesion for the two nuclei in the neighbourhood of El Putxet i El Farró, which are separated by the Ronda del General Mitre. One of the streets adjacent to the property is Carrer de Ballester, which is currently being reconditioned to introduce street-calming measures.

The works involve an investment of nearly 1.4 million euros and have the goal of gaining pedestrian space in response to a long-standing demand from local people to calm the street.