A series of activities is being organised to mark the 40th anniversary of the first democratic municipal elections, held on 3 April 1979. The programme recovers the memory of some decisive years in terms of mobilisations and labour rights, as well as the political, social and cultural demands which played a key part in the transition from a dictatorship to a democracy and without which today’s Barcelona would be impossible to make sense of. 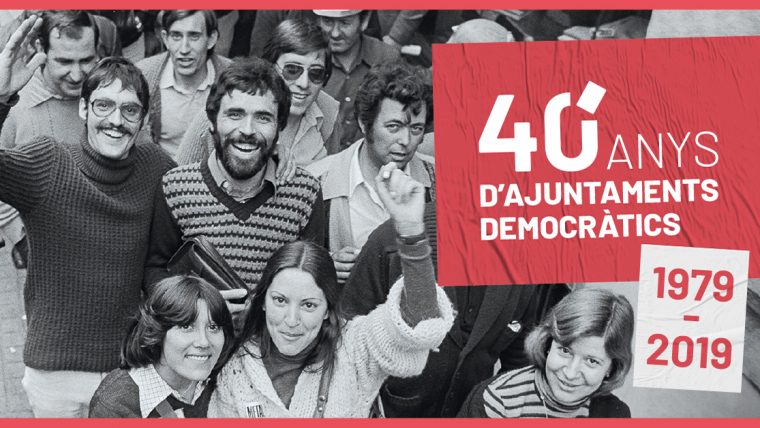 The programme includes five exhibitions (two on the city and three on the reality of the time in the districts of Gràcia, Sants-Montjuïc and Nou Barris), with photos, posters and texts from the time and which are kept at the Municipal Archive, as well as lectures, meetings and other opportunities for participation and reflection.

The goal is to update research and knowledge about what those elections meant in the city and what the shift from a dictatorship to a democracy involved. The cycle starts with a lecture in the Saló de Cent hall on 13 March by the sociologist and economist Saskia Sassen and the geographer Oriol Nel·lo, with other activities programmed through until February 2020.

The programme of activities is being organised by the Commissioner’s Office for Memory Programmes, the Barcelona Municipal Archive and the Institute of Present Pasts, in collaboration with the Associació Consell de Cent and the Fundació Carles Pi i Sunyer.

Institutional ceremony
Lecture by Saskia Sassen and Oriol Nel·lo
13 March, at 6.30 pm, in the Saló de Cent at Barcelona City Hall
Nearly forty years to the day since the first democratic municipal elections were held following the Francoist era, an institutional ceremony signals the start of a series of activities over the course of 2019 to commemorate the event.

Third lecture cycle
“People at the City Hall (1977-1983)”
21 March, 4 and 25 April, at 6 pm, in the Sala Martí l’Humà at the Museu d’Història de Barcelona (MUHBA)
An analysis of the initiatives, plans and proposals promoted by Barcelona City Council during the transition to democracy, particularly by cultural services, district offices and community movements in the city.

Exhibition
“Democracy in the streets (1977-1979)”
From 16 May to 15 September at El Born Centre de Cultura i Memòria
Exhibition by the city’s photographic archive using photos by the SE-GRÀ (Serveis Gràfics) collective. This set of photos taken between 1977 and 1979 constitute an extremely comprehensive account of the transition and the debates generated at that time. The images depict the streets as a common space where the construction of the new city can be seen. The exhibition is divided into three themes: the world of work, sexual rights and displays of culture.

Second meeting with Barcelona research and study centres
“Local research and the re-establishing of a democratic Barcelona”
1 June at El Born Centre de Cultura i Memòria
A meeting bringing together local research centres which investigate and disseminate knowledge of the city’s history. This year’s meeting looks at the participation of study centres in social and cultural change and in the recovery of local history as key elements in driving democracy in the neighbourhoods.

Exhibition
“Building a democratic Barcelona. The eagerness of learners (1979-1983)”
From 19 June 2019 to 28 February 2020 at the Municipal Contemporary Archive (AMCB)
A look at the work and projects of the first municipal government of the democratic era. Original documents from the AMCB archive offer visitors an insight into the challenges which faced the new councillors, as well as the projects, proposals and ideas used from 1979 onwards to turn Francoist Barcelona into a modern democratic city.

Exhibitions
“Barcelona, 1979. Neighbourhood democracy”
This project consists of three exhibitions in three different city districts: Gràcia, Sants and Nou Barris. The three displays offer a visual account of the city before and after the first democratic municipal elections on 3 April 1979: what the city was like and what some of its neighbourhoods were like just after the dictatorship; the forming of the first democratic municipal government; what the new city would have to be like, its modernisation projects, organisational and administrative decentralisation, urban challenges; the outbreak of freedom in the streets; popular cultural movements and more. All these aspects are covered by the three exhibitions as they seek to remind us of the first steps taken and the context within which Barcelona was transformed into a cultural, modern and democratic city.

Each exhibition will be complemented by a round table session on the most characteristic aspects of each district: culture and associations in Gràcia, new urban planning in Sants and social movements in Nou Barris.

NOU BARRIS
Nou Barris Municipal District Archive. Centre Cívic Can Basté
Exhibition: From 5 September to 5 October
Round table: “Nou Barris: dignity in the struggle from the north of the city”, 19 September at 6.30 pm

16th Barcelona History Congress
“Barcelona: from Francoism to democracy. Citizens to the fore (1973-1983)”
27 and 28 November at the Historical Archive of the City of Barcelona (AHCB)
Sessions to look further at the knowledge of the last few years of the Franco dictatorship and the first moments of the construction of a very fragile democratic system which gradually became consolidated by inertia, reform and rupture, and which meant a change in the municipal sphere.