Full Council calls for the immediate release of all political prisoners

The extraordinary full council meeting approved an institutional declaration calling for the immediate release of all political prisoners. The resolution was approved with favourable votes from Barcelona en Comú, the Grup Municipal Demòcrata, ERC, CUP - Capgirem Barcelona and the independent councillor Gerard Ardanuy.

The text approved is as follows:

AT THE FULL COUNCIL MEETING

On 30 October, the Spanish state prosecutor presented the National High Court and the Supreme Court with charges of sedition, rebellion and misuse of public funds against the Government of Catalonia and the Bureau of the Parliament of Catalonia for having implemented the results of 1-O.

Yesterday, on 2 November, the National High Court sent eight members of the legitimate Government of Catalonia to prison (one of whom is also the president of a political party with an 87-year history, and another of whom was a former First Deputy Mayor of Barcelona) and ordered the rest to be detained.

At the same time, the Supreme Court decided to subject the Speaker of the Parliament, Carme Forcadell, along with the majority of the Bureau, to police surveillance until they declare in court on 9 November.

These acts come in addition to a campaign making arbitrary use of Spanish justice for political ends, as has already been seen in the cases of the presidents of the ANC and Òmnium Cultural, Jordi Sànchez and Jordi Cuixart, and against those condemned for having organised the 9-N consultation.

The existence of political prisoners has no place in the current European Union and is an attack on the rights set out in the Universal Declaration of Human Rights by the UN General Assembly on 10 December 1948. It is also an attack on the Convention for the Protection of Human Rights and Fundamental Freedoms adopted by the Council of Europe in 1950 and ratified by the Spanish state.

This City Council, now and over the centuries, has always defended the institutions of the Government of Catalonia. Barcelona’s commitment to freedom, peace, dialogue and Catalonia is firm and non-negotiable.

Because of this, and in keeping with Acts 60.6, 65, 73.5 and 101.1of the City Council Framework Regulations, Barcelona City Council, at Full Council, approves the following

-To reject the repressive escalation of the last few months and call for the immediate release of all political prisoners who are being held despite having always acted peacefully and democratically, in accordance with the mandate delivered at the ballot boxes.

-To express full support for the Bureau of the Parliament of Catalonia, who have had their powers taken away from them via the outrageous application of Article 155 of the Spanish Constitution.

-To call for an end to the judicialisation of Catalan politics and condemn the arbitrariness and partisan use laws are being applied with, perverting the separation of powers which any decent rule of law should guarantee.

-To urge the European Union and all other international institutions to practice political mediation which facilitates dialogue and the search for a political solution.

-To call for the application of Article 155 of the Spanish Constitution to be lifted immediately. 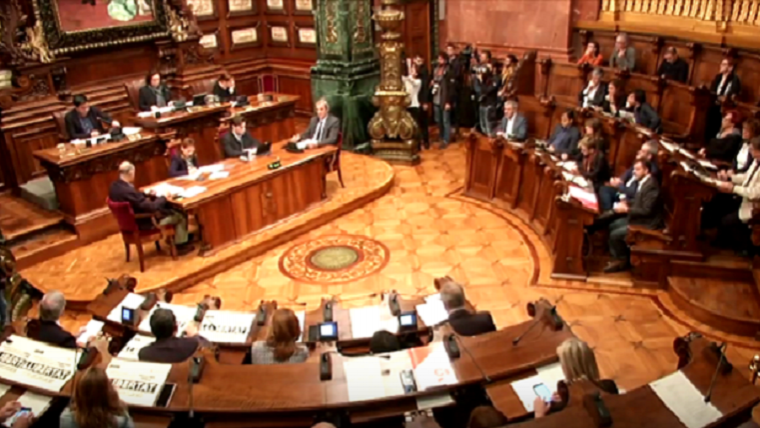