Second day of the IAAF in Barcelona 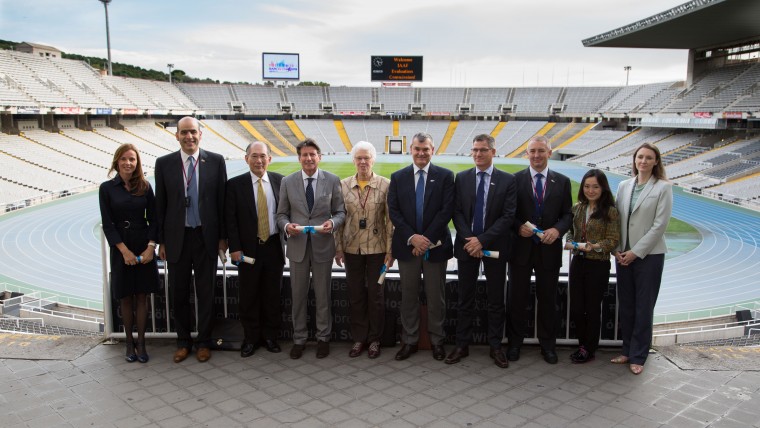 The IAAF delegation ended its first day of appraisal with a visit to the Lluís Companys Olympic Stadium in Montjuïc, meeting up with six popular professional athletes who were presented as an example of the representative range and importance of athletics in the Catalan capital.

Yesterday marked the first day of the visit by the International Association of Athletics Federations (IAAF) delegation to the Catalan capital, who are currently over to assess and find out about Barcelona’s host bid for the 2019 World Athletics Championship.

The first day of the visit saw a whole series of talks at the Joan Carles I Hotel where the IAAF was offered the city’s project for the championships, as well as visits to some of the main venues planned in Barcelona’s bid, including the Palau de Congressos, the Palau Sant Jordi, Pau Negre-Parc del Migdia municipal athletics track and the Lluís Companys Olympic Stadium, where a "family" photo was taken.

The snapshot was taken at the Marató Gate, where the Vice-President of the IAAF, Sebastian Coe, and the other members of the delegation, met up with a group of popular, top-ranking Catalan athletes.

These included Jordi Llompart, the historic Barcelona athlete who became the first Catalan and Spaniard to win the gold medal at a European Athletics Championships event; Berta Castells, a specialist in hammer throwing who took part in the 2004 Athens, the 2008 Beijing and the 2012 London Olympic Games; Haja Gerewu Griñó, the disk and shotput thrower; Maria Llum de la Chica i Vila, now 75 years old, a regular participant on Barcelona’s fun runs; Josep Maria Ojeda Viralta, a regular Milla Claror runner in the children’s category; and Sílvia Ramírez, an athlete with a disability.

The delegation’s visit and the presentation of the bid during the first day established the events and venues for Barcelona 2019, should the bid win this coming 18 November at the ceremony taking place in Monaco.

The Championship’s opening ceremony would take place at Avda Maria Cristina, with the Montjuïc Magic Fountain and the Palau Nacional in the background, while the closing ceremony would be held at the Lluís Companys Olympic Stadium in Montjuïc, the competition’s indisputable venue.

The Press Centre and IBC would be located at the Palau Sant Jordi and the Hospitality Village and Market Street on the Minici Natal esplanade, in the middle of the Olympic Ring.

The IAAF Congress, during the federation’s congress, would be held at the Palau de Congressos de Catalunya, though the official opening ceremony would take place at the Palau Nacional, the headquarters of the Catalan National Museum of Art (MNAC).

Meanwhile, as a promotional school and city event, the Athletics Festival would be held, featuring a programme of athletics-themed activities and events before and during the holding of the championships. The festival would be aimed at promoting sport among young people.

The Mayor and the IAAF: a joint press conference at the City Hall

Today, at 4 pm, at Barcelona City Hall’s Saló de Cròniques, Xavier Trias, and the Vice-President of the IAAF, the former athlete Sebastian Coe, will be offering a joint assessment of the appraisal visit made by the international athletics body of the 2019 Barcelona host bid.

They will be accompanied by the Deputy Mayor for Quality of Life, Equality and Sports, Maite Fandos; the President of the Spanish Royal Athletics Federation (RFEA), José Maria Odriozola; the IAAF’s Competitions Director, Paul Hardy, and its Communications Director, Nick Davies. 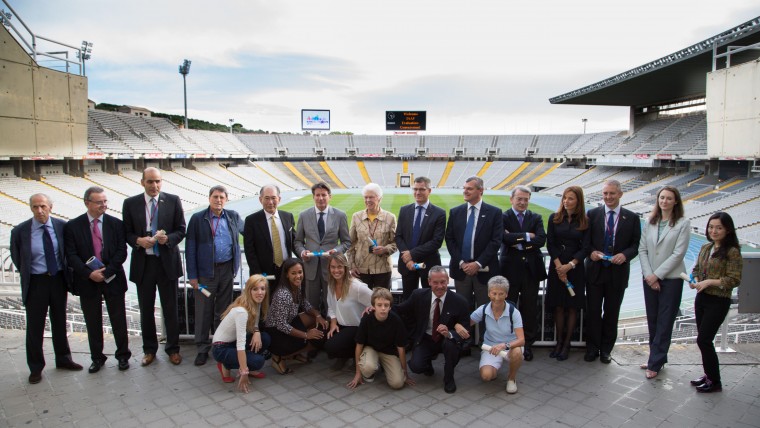