Opposition proposals from the full council meeting of 23 September 2020

September’s full council meeting approved four opposition proposals: one from the ERC calling for the regulation of tourist accommodation to prioritise residential use and the social function of housing; one from JxCat, to create a working group to end squatting by illicit organisations or which generates serious problems with other residents; one from the PP calling for a comprehensive agreement for the future of the Ciutat Vella district, and one from BCN Canvi, to withdraw the posthumous gold medal awarded to Heribert Barrera i Costa. 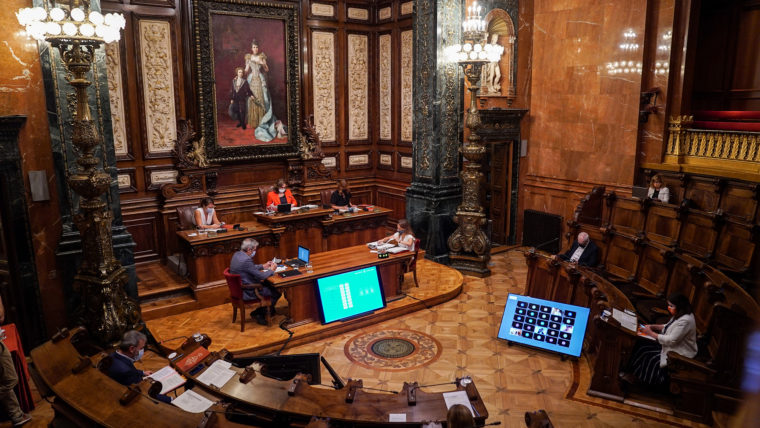 ERC’s proposal to the full council was for a by-law to regulate the use of tourist accommodation and shared homes in the city. The goal is to prioritise the residential use and the social function of housing, specifying the sphere of application, owners’ obligations, administrative classification, the regime for fines, acquired rights and expiry. The proposal was approved with votes from ERC, BComú and the PSC, while Cs, the PP and BCN Canvi voted against it and JxCat abstained.

JxCat called for the creation of a working group to put an end to squatting by illicit organisations and squatting which generates serious problems with other residents. The meeting approved the proposal with votes from all municipal groups, except for Cs, which abstained.

Cs also put forward a proposal on squatting, its regulation and the development of a municipal plan to combat the illegal occupation of homes, for owners to regain possession of occupied properties and for legal advice to be offered to affected owners. The proposal was rejected with favourable votes from Cs, the PP and BCN Canvi, with ERC, BComú and the PSC voting against it and JxCat abstaining.

The PP called on the municipal government to present a comprehensive agreement on the future of the Ciutat Vella district, relating to housing, economy, safety, mobility, urban planning, culture and the social sphere. The proposal was approved unanimously.

Barcelona pel Canvi proposed revising the agreement to posthumously award the city’s gold medal to Heribert Barrera i Costa and to annul it. The nominal vote on the proposal was approved with 26 votes in favour and 13 against.