Spring brings a buzz to culture in the neighbourhoods 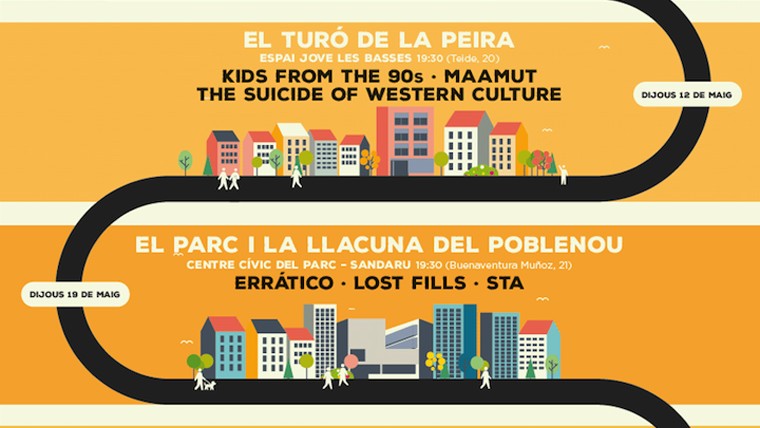 On Thursdays, from 5 to 26 May, the second edition of the Primavera als Barris programme will be offering a dozen free concerts spread over four different days at various municipal facilities in the neighbourhoods of Les Corts, La Marina de Port, El Parc i la Llacuna del Poblenou and Turó de la Peira.

The series of concerts is designed to give a buzz to the cultural life of these areas, which don’t usually form part of the usual circuit for live acts, and to showcase their local talent. Overseen by Fnac, and part of the Primavera a la Ciutat initiative, the festival will extend its activity to different youth facilities and civic centres in Barcelona, with performances by new bands and by consolidated acts in line with the artistic criteria of the Primavera Sound festival.

This edition is headed by the experimental electronic duet The Suicide of Western Culture, a big act on the current scene thanks to the album Long Live Death! Down With Intelligence!, which has become one of the best-ranking albums fir 2015 among specialist media. The Majorcan act Lost Fills will be accompanying them, as will Los Hermanos Cubero, with their revitalised form of traditional Castilian folk, and Tremenda Trementina from Pamplona, who have just released their third disc.

Other acts performing involve a selection of groups which rehearse at different municipal facilities, such as the post-rock formation Maamut, the fusion of African rhythms and western melodies created by Ominira and the experimental dub of STA. Likewise, Cheetah Brava will be performing their blend of tropical rhythm and electro pop, Aloha Bennets and Barbantes are garage bands, and Errático and Kids from the 90s offer indie rock. All concerts are free and start at 7.30 pm.