Ten ecofeminist initiatives for a fairer and more equal world

‘Ecofeminism is the answer’ is a cycle of activities starting on 29 February to mark International Women’s Day, on 8 March. Ten activities are being organised over a period of almost a month, ranging from dialogues to shows and workshops, inviting us to build a fairer, more equal and sustainable world and share reflections on the relationship between the climate emergency and gender justice. 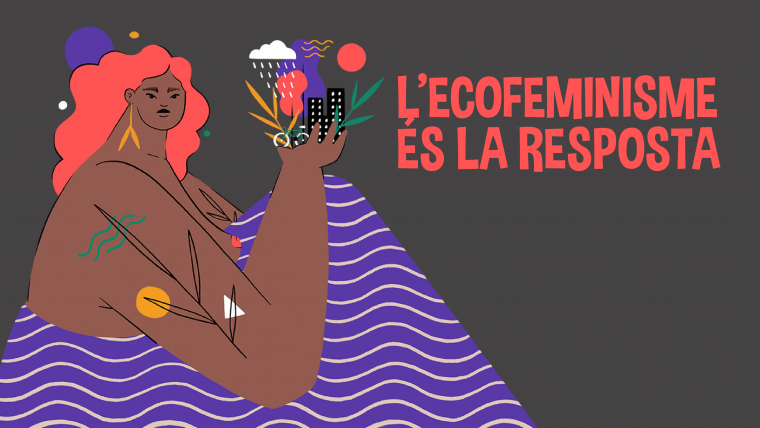 Using the slogan ‘Ecofeminism is the answer’, the cycle consists of ten free activities which are open to everyone. These include dialogues with feminist thinkers and leading ecofeminist figures, as well as round tables on ecofeminist experiences in the city and other places in the world. There are also artistic activities with a message, such as a feminist illustrators’ marathon, creative illustration workshops, a film forum about a documentary on the relationship between migration and care work and a play looking at the problem of the feminisation of poverty.

Ecofeminism is a single movement covering the transformational will of feminism and ecologism to achieve a fairer, healthier and more equal world, free of oppressive or patriarchal attitudes which affect women and nature alike. The culture of domination and power generated by unequal gender relationships and global injustice is the same culture that triggers the exploitation of nature and the rest of living beings.

Based around the struggle for a fairer and more equal society, and embracing feminist voices, ecofeminism addresses topics ranging from maternity, care and unpaid domestic work to the climate emergency, consumption patterns that undermine the preservation of natural resources, animal maltreatment, food and health.

References made to ecofeminism include the most structural feminist thinking of Simone de Beauvoir, the ideas of the feminist writer Françoise d’Eaubonne, who coined the term in the mid-1970s, and current voices such as the philosopher Alicia Puleo, who focuses on the values of freedom, equality and sustainability and will be taking part in one of the dialogues.

Agenda for the cycle

This year’s award uses the slogan ‘Ecofeminism and climate emergency’ to recognise intersectional women-focused projects with the gender perspective which help tackle climate change and develop ecofeminist action in the city.

The doors open at 5 pm for those attending to vote for the public award, with the ceremony to follow at 5.30 pm. The ceremony includes a discussion between María Emilia Tijoux and Ana Tijoux, and a performance by the Coral Sant Medir with body percussion.

After the awards are given there’s a concert outside El Born CCM by the Chilean artist Ana Tijoux. Composer, musical arranger and winner of a Latin Grammy, Tijoux has attracted her share of attention from the international media. Feminist and activist, her colourful hip-hop combines with great political and awareness. She frequently takes part in campaigns against inequality and oppression in the world.

Ecofeminist illustrators’ marathon and discussion with the audience

Nine top illustrators from the city will be creating a piece of ecofeminist work together. The audience can take part in a discussion with them all afterwards.

The illustrators’ marathon rounds off with a concert by the artist Asmâa Hamzaoui, accompanied by her band Bnat Timbouktou. This is a chance to enjoy the sound of the guembri, the African ancestor of the bass. Hamazaoui is the first woman to play this instrument professionally and has performed at venues such as the Museo Reina Sofía in Madrid and at festivals such as Roskilde, Oslo World Music and Womex.

Two workshops on humour, communication and creativity are connected:

Session on ecofeminist experiences in the city

How can we be ecofeminists here in the city? Round table to explore strategies for resistance and transformation based around three areas: mobility, food and waste. Blanca Valdivia (Col·lectiu Punt 6) will be talking about urban planning and mobility; Eva Vilaseva and Berta Vidal (Supermercat Cooperatiu i Participatiu de Barcelona and Food Coop BCN) will be talking about sustainable food and food sovereignty, and Rosa García (Rezero) will be reflecting on waste and health. The session will be moderated by Ramona Fernández (Sindillar/Sindihogar).

What is ecofeminism? How did it come about and evolve? What does it tell us about our bodies and our sexuality? What should ecofeminist environmental education be like? Two leading ecofeminists will be taking part in this discussion and responding to these questions and many others.

Theatre play on the vulnerability of a woman who, as the cornerstone of a family, faces energy poverty, the housing emergency and gender inequality. The audience are invited to take part in a post-function discussion.