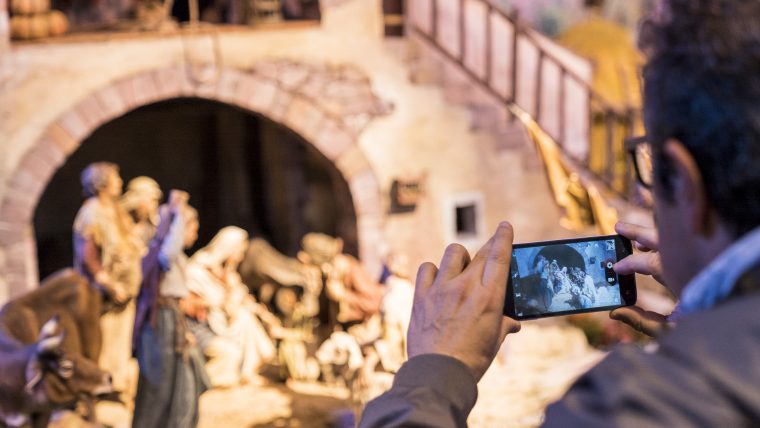 It was only incorporated last year into the city’s Christmas programme, but the courtyard nativity scene at the Frederic Marès Museum has already become a Barcelona tradition. It can be seen in the museum’s courtyard from 23 November to 2 February during normal opening hours. This year, this traditional-style nativity scene offers us a trip to the forests of Pedraforca, because the characteristic shape of that mountain presides over all the scenes. But the journey to the landmark doesn’t end there, because to reach the nativity scene, you first have to wander through the museum’s courtyard; it’s decorated like the area’s forest and was created by a landscaping team whose members include Ignasi Bisbe, Mireia Cardús, and Mònica Luco. This way, the Gothic space of the museum converges with the nativity scene to create an immersive experience.

The creators of this nativity scene are members of the Barcelona Association of Nativity Scene Builders, a more than hundred-year-old entity founded in 1863. Following the traditional style that has always characterised their work, they created a nativity scene featuring natural elements such as bark, moss, and other plant materials. The figurines are made of wood and were hand-crafted in an Italian workshop. Like a proper traditional nativity scene, it boasts the three essential scenes: the Birth featuring baby Jesus, Saint Joseph, Mary, the Mother of God, and the ox and the donkey; the Annunciation to the Shepherds; and the Ride of the Three Kings.

The visit to the nativity scene is complete, with a distinct Christmas feel, with Christmas songs and choir singing concerts that different organisations from the city put on at the weekends. On 29 December, the Night of the Nativity Scenes will take place in all of Catalonia, and in the Marès Museum, it will be celebrated with special opening hours and a couple of talks about this tradition, so deep-rooted in our country.

Programme of Events Happening Around the Nativity Scene: