February’s full council session approved three proposals during the section of the meeting for proposals and control of the municipal government: one from JxCat to create a technical office for Areas for Urban Economic Promotion (APEU), one from BComú urgently calling on the state to pardon any artist condemned for offences against religious sentiment or public shaming, against the crown or for glorifying terrorism, and one from the PSC unequivocally condemning the violent acts of recent days. These last two, like the three rejected from Cs, the PP and BCN Canvi, also condemning recent violent acts, included content for an institutional declaration. 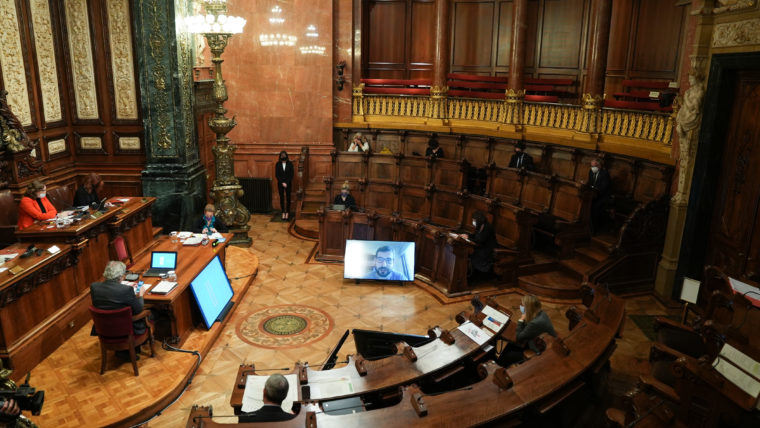 Junts per Catalunya presented the Full Council with a proposal for a technical office for APEU, to disseminate the recently approved law on areas of urban economic promotion among commercial districts and associations, and to offer advice and technical support for the creation of new ones in the city. The proposal was approved with votes from the ERC, JxCat, Cs, the PP and BCN Canvi, with BComú and the PSC abstaining.

In contrast to the proposal from JxCat, the rest of the proposals were for content for an institutional declaration. They were put forward by BComú, the PSC, Cs, the PP and BCN Canvi, and were all linked to the imprisonment of Pablo Hasél, the demonstrations in support of the artist and the riots of recent days.

Barcelona en Comú proposed calling on the Spanish cabinet to urgently pardon Pablo Hasél, Josep Valtonyc and any other artist condemned for offences against religious sentiment or public shaming, against the crown or for glorifying terrorism. The proposal also condemned the damage to public and private property and showed support for the demonstrators and police officers injured in the protests. The proposal was approved with votes from the ERC, BComú and JxCat, with the PSC, Cs, the PP and BCN Canvi all voting against it.

The proposal from the PSC called for unequivocal condemnation and rejection of the violent acts of recent days, the promotion of peaceful demonstrating as an essential means of defending rights, causes and opinions, and a show of support for the city’s commercial and business network. The proposal was approved with votes from the PSC, Cs, the PP and BCN Canvi, with the ERC and JxCat voting against it and BComú abstaining.

Cs called on the Full Council to condemn the violent riots, show support and solidarity with police and security forces and local residents affected, and to call on the municipal government to initiate the necessary procedures to recover the cost of the damage borne by the City Council. The proposal was rejected, with Cs, the PP and BCN Canvi voting in favour and the ERC, BComú, the PSC and JxCat voting against it.

The PP presented a proposal to condemn the violent acts, particularly the attack on El Periódico de Catalunya, to show support for the Mossos d’Esquadra police corps, to quantify the damage caused by the riots and back the civil action to be taken by the prosecution service. The proposal was rejected, with favourable votes from the PSC, Cs, the PP and BCN Canvi, while the ERC, BComú and JxCat voted against it.

The proposal presented by Barcelona pel Canvi condemned the violent acts in Barcelona, as well as those in other cities in Spain, proposing that the City Council act as private prosecutor as the aggrieved party due to damage caused to municipal property during the riots. The proposal was rejected, with Cs, the PP and BCN Canvi voting in favour, while the ERC, BComú and J×Cat voted against it and the PSC abstained. 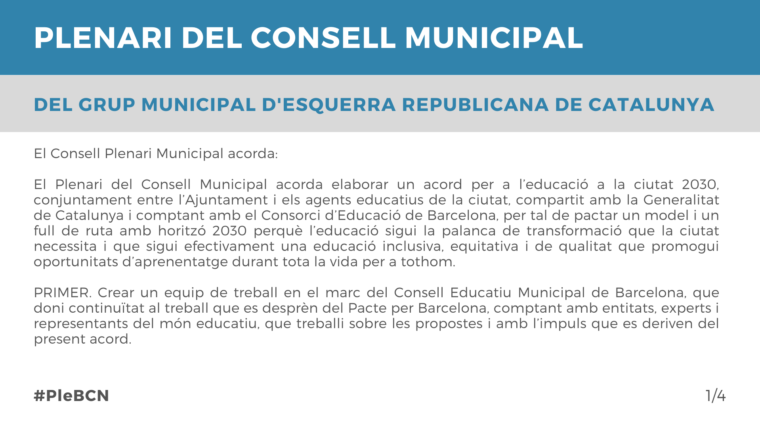 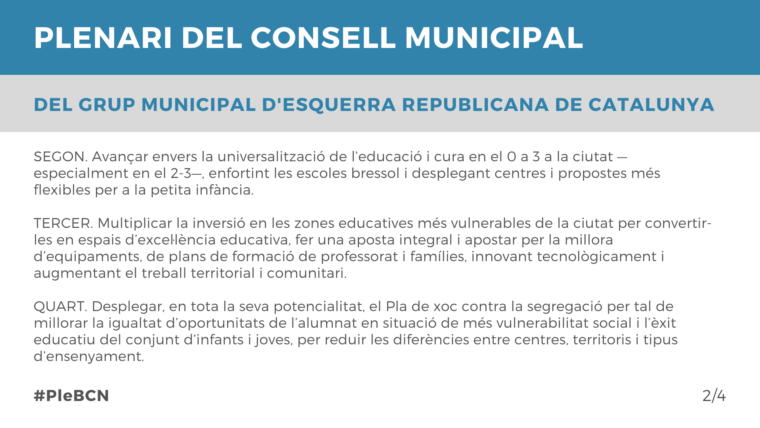 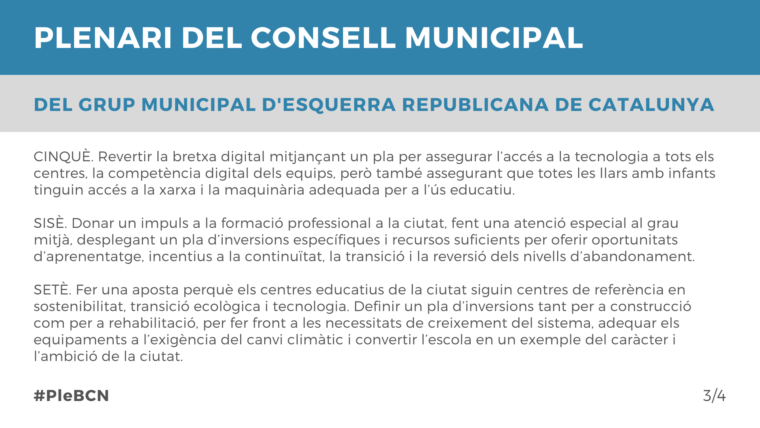 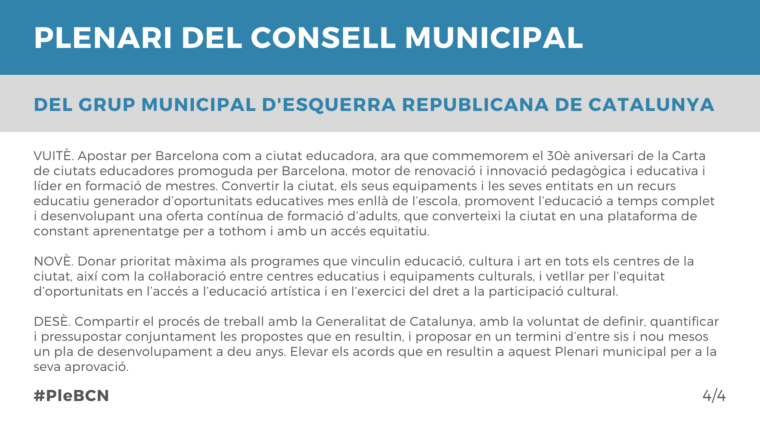 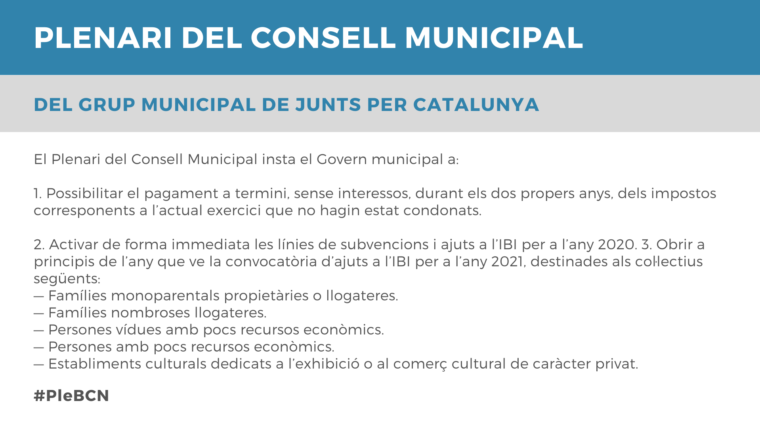 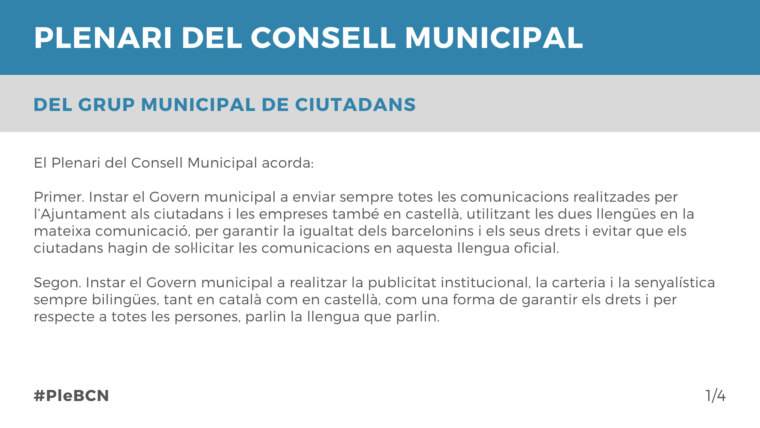 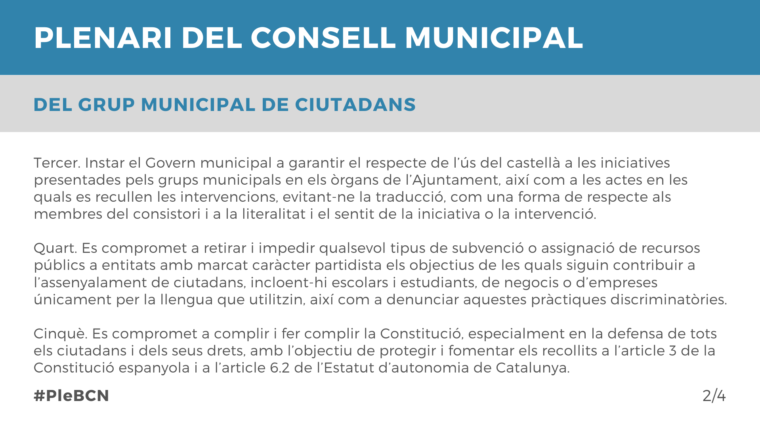 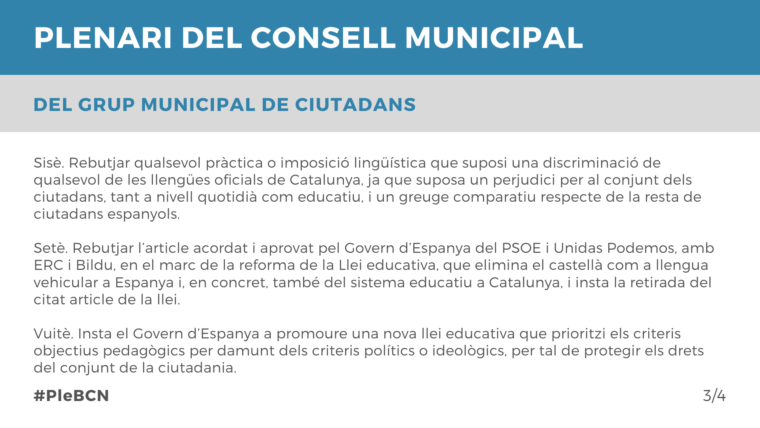 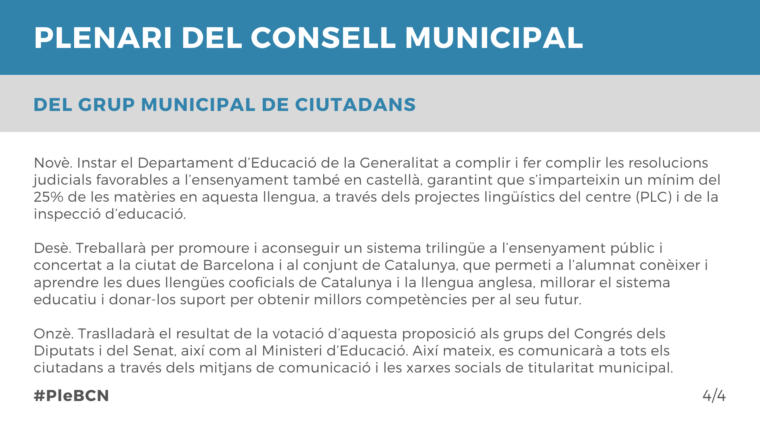 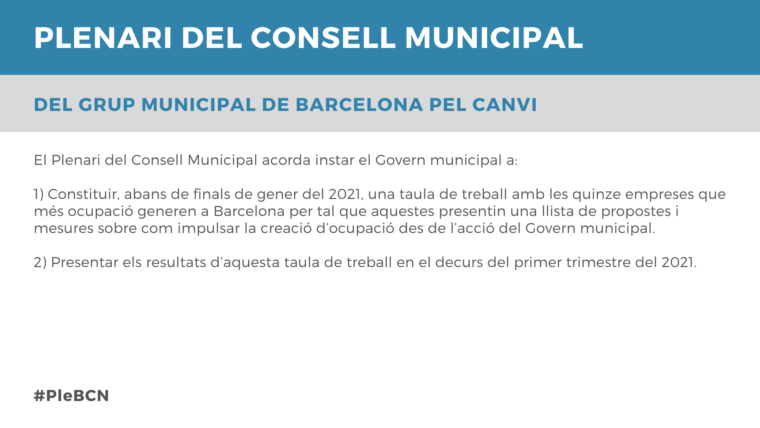 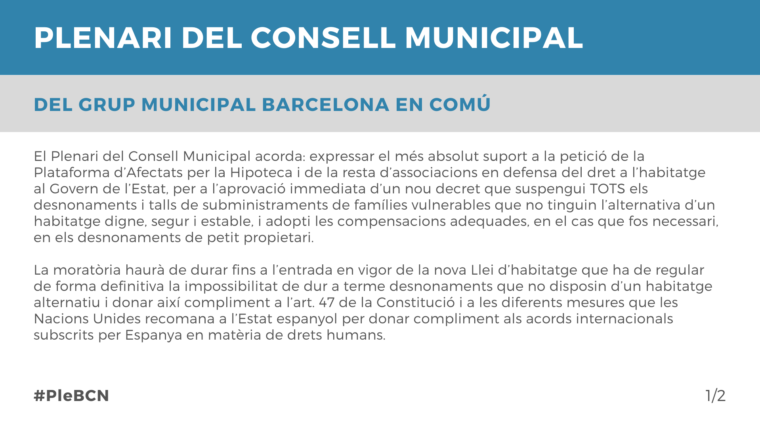 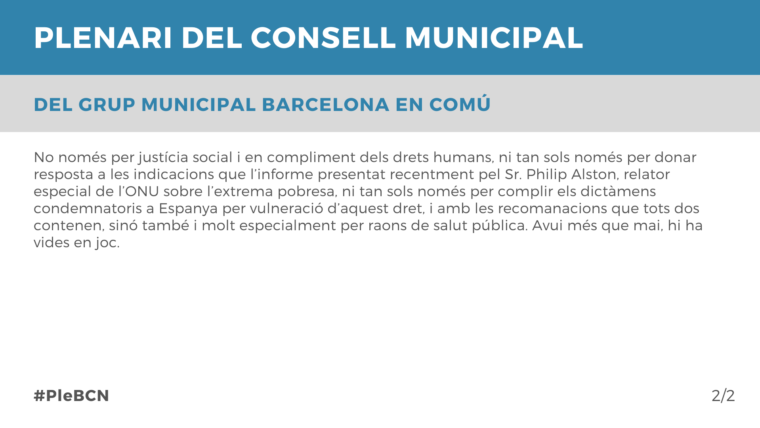 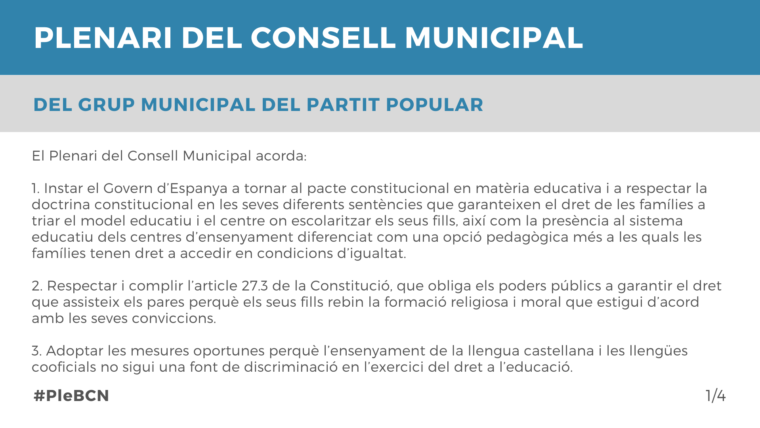 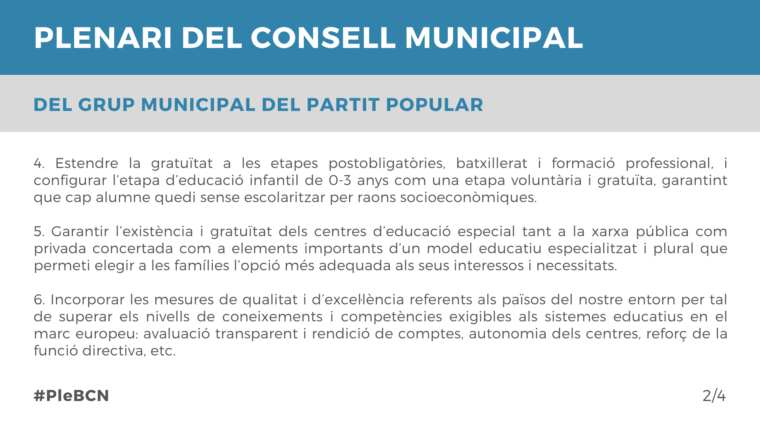 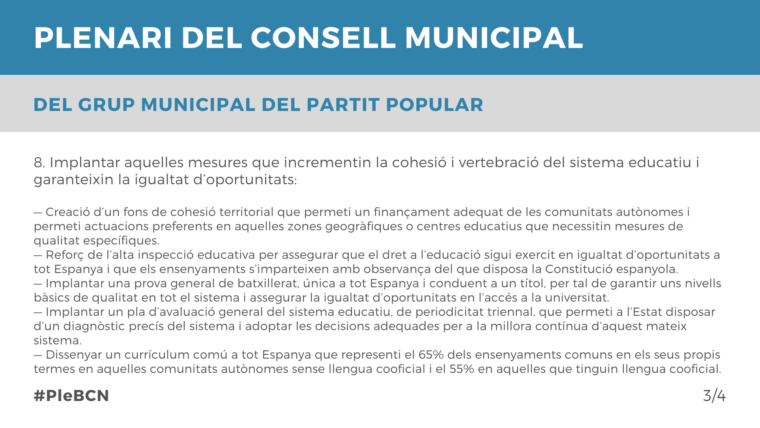 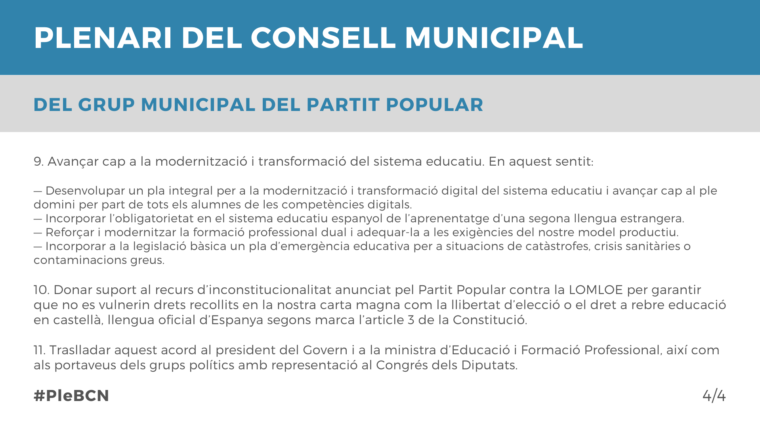