The bathing season begins at the city's beaches, with measures to control beachgoer numbers 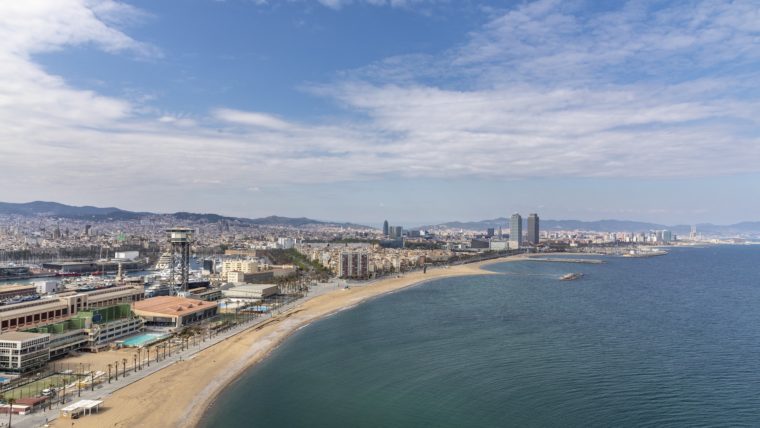 A set of specific health-protection measures for dealing with the COVID-19 health emergency are being steadily implemented during the start of the bathing season, at Stage 2 of the lockdown exit. As from today, recreational bathing and relaxing on the sand will be permitted, besides the activities already allowed so far, such as doing sport and taking walks, provided beachgoers keep to a social distance of 2 metres from one another and crowd-control measures are applied.

The first measures for regulating numbers have already begun to be steadily implemented on the Ciutat Vella district’s beaches, as these beaches usually record the highest occupancy levels: the Sant Sebastià, Sant Miquel, Barceloneta and Somorrostro beaches. The measures will later be applied to the city’s other beaches, located in the Sant Martí district: Nova Icària, Bogatell, Mar Bella, Nova Mar Bella, Llevant and Banys del Fòrum.

Beachgoer numbers will be monitored by video sensors, a system that will provide real-time information on the volume of the beach occupied, so the beaches’ real-time occupancy can be known at all times. The system will send out a warning when beachgoer numbers exceed the stipulated maximum; instead of identifying individual people it will calculate numbers by shadow detection.

A total of 18 video sensors will be deployed, capturing a photogram every 5 minutes that will be sent using an automated process to a central server, with appropriate security measures in place, such as information encryption. The images will be processed in the central server through AI and other algorithms, which will provide an approximate number of beachgoers for specific beaches. The information will be sent to a control centre where, by combining it with other information provided by the Guardia Urbana (city police) and information officers, the total number of beachgoers at the city’s beaches can then be calculated.

While the video sensors are still being installed, for the time being the system’s information will be based on the observations made by the information officers out on the beaches, and compared with the information that is provided by the science cameras installed in the Torre Mapfre building, managed by the Institute of Marine Sciences.

For the purpose of regulating access to these four city beaches, a system of naturalised fences will be installed, with wooden pegs and rope, with entry points, in case access to a beach has to be temporarily restricted at any time, because of crowd numbers. What is more, in case there is a high concentration in a particular area, users of other beaches with less occupancy will be informed and warnings given out so that people do not gather in the area next to the sea.

Information towers will also be put up at access points to the beaches stating the measures that have to be complied with. This information that will be given out throughout the day through a megaphone system on the beaches. In addition, you can find full up-to-date information on the municipal beach website as well as occupancy levels at the city’s beaches. All beach users are advised to consult the website before they go to the beach