The demonstration on 11 September along the Gran Via de les Corts Catalanes, from Plaça d’Espanya to Plaça de la Universitat, is the main event being organised on Catalan National Day. A special operation will be in place on the day to guarantee mobility and extra public transport will be laid on. People are recommended to get about on foot or by metro, avoid using the stations nearest to the demonstration and follow advice issued by Civil Protection. 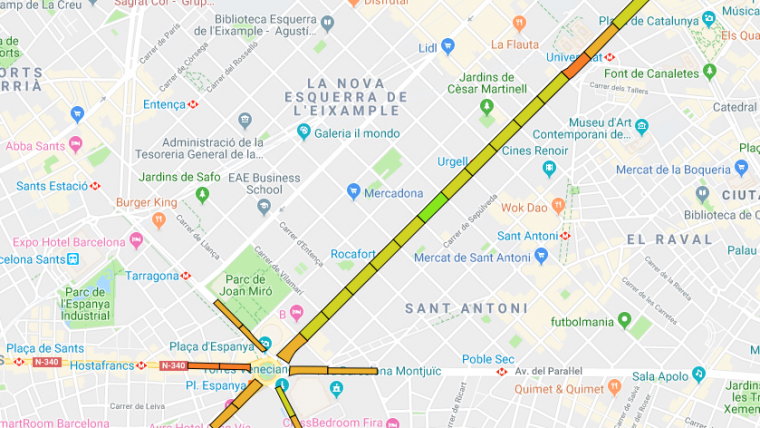 You can keep abreast of disruptions to public transport via the TMB Twitter account @TMBinfo, as well as @FGC and @Rodalies.

The stage and some of the main areas for the event are in Av. Reina Maria Cristina, which will be closed to traffic from 8 am on Monday 9 September through to 2 am on Thursday 12, allowing for structures to be set up and later dismantled.

In addition, on Tuesday 10 September, from 8.30 am and throughout the day there will occasional restrictions to enable the PA system and other elements to be installed on lampposts in:

Plaça d’Espanya will be completely closed to traffic as from 2.30 pm on Wednesday 11 September. Vehicles will be diverted from the side lane of the Gran Via into Creu Coberta and Tarragona. The rest of the streets where the demonstration is being held will start being closed to traffic from 3 pm.

The event ends at 6.45 pm and from then on, as the volume of people allows it, Plaça d’Espanya and adjacent streets will be re-opened to traffic, with normal circulation anticipated in the whole area from 9 pm. Av. Reina Maria Cristina will be cleared of structures in the road and opened again to traffic the following day.

Four purple points will be operating during Catalan National Day, to inform, identify, draw attention to and act against sexist aggression. They will be located at:

Four areas of 80 square metres will be set aside with seats and shade for senior citizens, pregnant women and families with babies.