A public celebration is being organised in Pg. Zona Franca on 8 September, from 6 pm onwards, to mark the opening of the L10 Sud metro line. The new section of the line comes after decades of demands from local residents to get the metro to reach the neighbourhoods of La Marina.

A historic day awaits the neighbourhoods of La Marina on 8 September 2018, as for the first time ever it will be possible to get the metro there. The long-standing demand for this public transport system to reach the neighbourhood will become a reality with the opening of two of the five stations along the new L10 Sud line: Foc and Foneria. The other three stops, in L’Hosptalet de Llobregat, connect with the L9 Sud, L1 and L5 lines, meaning the new L10 Sud line will enable users to reach everywhere quicker than ever before from La Marina.

Local residents in the neighbourhood of La Marina have consistently called for a metro connection over the last thirty years. The project came to a standstill in 1992 when the Government of Catalonia prioritised other extensions to the metropolitan network. After years of street mobilisations, petitions and signs on balconies urging the metro system to arrive, the next unfulfilled completion date came and went in 2002. Finally, the tunnel was bored, but the stations still needed completing. Two years ago, the City Council and the Government of Catalonia agreed on the sale of various buildings, with the 40 million euros generated to be used to get this section of the L10 Sud up and running.

Come along to the party!

Local organisations in the neighbourhoods of La Marina are preparing various activities at the Foneria metro station. The celebration begins at 6 pm with a children’s show and music, courtesy of the Ambuaka company. A popular inauguration follows, with the reading of a manifesto, with more music and dancing afterwards with ‘tradimensional’ music from Grallioli (an electronic music formation featuring traditional graella pipes). Finally, at 9 pm, a video will be shown on the struggle to connect the neighbourhood with the rest of the city by getting the metro system to arrive. Throughout the afternoon two display areas will also be showing how the L10 Sud line works and offering a chronological explanation of the struggle by local residents.

Note: On Saturday 8 September in the afternoon, Pg. Zona Franca will be closed to traffic travelling in the direction of the sea, between Carretera del Prat and Carrer de la Foneria. 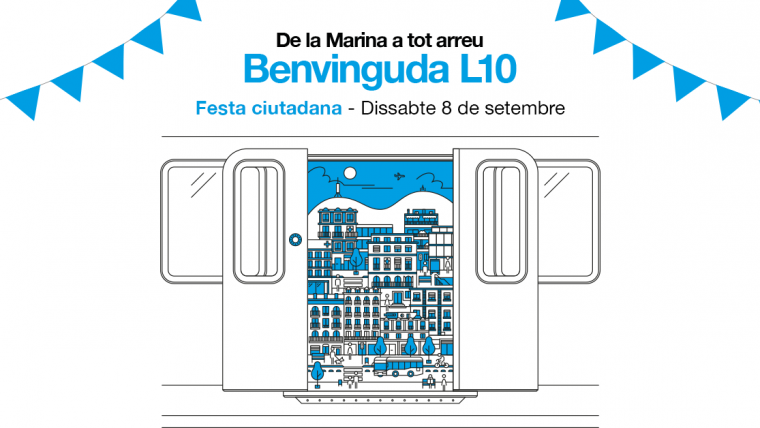