Home » News » The reAct sessions consolidate Barcelona’s commitment to a new economic model that is more competitive, sustainable and equitable

The reAct sessions consolidate Barcelona’s commitment to a new economic model that is more competitive, sustainable and equitable

The reAct sessions consolidate Barcelona’s commitment to a new economic model that is more competitive, sustainable and equitable

Public and public-private projects with the aim of generating over 100,000 new jobs over the next 10 years were shared

Public and public-private projects with the aim of generating over 100,000 new jobs over the next 10 years were shared

Today, Barcelona held the closing ceremony for the reAct working sessions where, for four days, experts from various fields discussed the new economic agenda priorities for the next 10 years. The sessions focused on various themes concerning how to reactivate the post-Covid economy and rethink how to construct a more competitive, resilient and sustainable city, with working committees on Barcelona as a digital capital, as a leading green-economy city, “Sports tech”, the blue economy and creating new jobs.

The last speech of the sessions was given by John Hoffman, the CEO of GSMA, who observed that we are all starting from zero in the recovery. He forecast a future of reconstruction and working together.

Participants in the closing ceremony included Ada Colau, the Mayor of Barcelona, Jaume Collboni, the First Deputy Mayor for the Economy, Employment, Competitiveness and Treasury, Ramon Tremosa, the Catalan Minister of Enterprise and Knowledge, and Teresa Ribera, the Spain’s Fourth Vice-President and Minister for Ecological Transition.

During her speech at the reAct closing ceremony, Mayor Ada Colau emphasised that the city is resilient, open and permeable to change, and that throughout its history, Barcelona has been a driving force for social and economic transformations. This was true in the Industrial Revolution and “it is true today with the technological and digital revolution, and it aims to be so with the economy linked to ecological transition.” 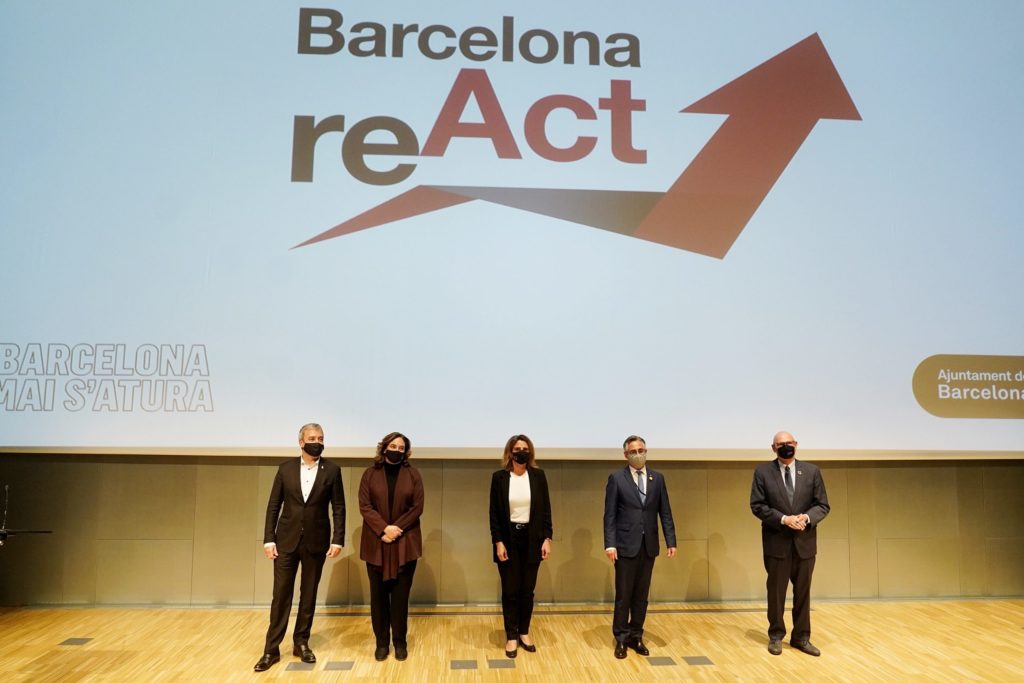 The Mayor also expressed the need to tackle the challenge of achieving an ecological transition that is also a driving force for economic recovery, moving from the “Old Generation to the New Generation”, which involves a change of model that includes sustainable mobility, renewable energies, building renovation and a different model for food production and consumption. “This change of model is Barcelona’s New Green Deal, a real transformation of the economic model and business opportunities”, she affirmed.

Colau also set as a future goal the leading role that cities have to play, and explained that Barcelona “aims to take the lead in the recovery, through alliances with all the Metropolitan Region, the real city of five million inhabitants, and with all the international networks in which we participate”, adding that “we want to do so while recuperating the best Barcelona tradition, our vocation for a global political agenda, through dialogue”. She affirmed that “this time, the city of marvels also wishes to be a driving force for innovation, for job creation, for transforming the urban model, for innovative social policies and for fighting to defend the planet, as well as generating real economic alternatives by means of viable, sustainable and courageous policies.” She rounded off her speech by stating that “we have this ambition, because we believe in Barcelona, we believe in its people, in its businesses and in our collective capacity for growing in the face of difficulties.”

Jaume Collboni, the First Deputy Mayor for the Economy, Employment, Competitiveness and Treasury, described the sessions as “a cry for the reactivation of Barcelona, based on a firm belief in the city’s possibilities; an open, courageous and entrepreneurial city that has everything in its favour for making the future a success”. He also emphasised “the generational challenge we are facing in terms of fighting the pandemic, which has brought everything to a halt while also speeding everything up, as well as the obligation of good politics to think beyond tomorrow in order to transform the economic model. Because Barcelona has to get away from speculation and negative growth. It has the two necessary ingredients that ensure inclusive, sustainable growth: talent and technology. It has vision, it has projects and its citizens are eager for their city to get back on its feet.”

Ramon Tremosa, the Catalan Minister of Enterprise and Knowledge, affirmed that “European funds shouldn’t be used for current expenditure; they must be used to convert industry and create new ones”. “Now is not the time for spending money on electric chargers, which should be done through public expenditure, but for converting factories and creating new ones, such as battery plants”, he stressed.

The Minister reiterated that the Catalan Government wants “more involvement and participation” in the Next Generation, and in this regard he recalled that “although we haven’t been asked, we have done the work of identifying and channelling the projects from economic, social and local experts and stakeholders. He described the Next Generation as “a fantastic opportunity for opening up more and for improving the Catalan economy, which has grown in recent years due to exports and attracting international investment”.  “In the worst crisis in the last 80 years, Europe has shown its best side”, he declared.

Teresa Ribera, the Spanish Government’s Fourth Vice-President and Minister for Ecological Transition, affirmed that “in this city of marvels, it is extraordinary that we have decided to debate reactivation and to speak about what model we want to create together. This is why I share the vision of long-term pragmatism that requires a short-term concretion of resources and projects. Barcelona and its attraction represent an example of innovation: design and dynamism with connections and networking in regard to knowledge and stimuli. Furthermore, another big challenge for being able to reconcile ourselves with the planet is the use of resources from the perspective of the circular economy. In addition to the profound relevance of the blue and green economy. All of this must be supported by the public sector and by the ecosystem in order to apply innovation to the way we produce things. The design of Barcelona’s urban area is also vital for this reactivation, which is part of a shared universe of advances and progress with local services, focusing on design, employment, catering and quality, in order to make it possible”.

During the ceremony there was a review of some of the debates on reactivating and transforming Barcelona’s economic model, so that it becomes a major driving force for the prosperity of Catalonia, Spain and Southern Europe, with its own economic model, the Barcelona Green Deal, based on competitiveness, sustainability and equality.

As part of the sessions, Barcelona’s public and public-private projects for the six main areas of economic development were shared: the centre-Vila Laietana, 22@ nord, the Olympic Port and the Port of Barcelona, Marina and Zona Franca, the Eix Besòs and coastline (Barcelona Innovation Coast), with the aim of generating more than 100,000 new jobs over the next 10 years.

Emphasis was placed on the need for tackling the climate and energy challenge in such a way as to simultaneously ensure environmental sustainability and economic competitiveness. Barcelona is seeking sustainability by converting its coastline into a Blue Economy hub, for Green Economy projects in the El Besòs Eco-district and by installing solar panels with the MES Barcelona project, mobilising over €160 million of investment in energy rehabilitation.

Another shared aspect was the need to be more resilient, with a diversified economy, revitalising the city centre with projects that include transforming the Central Post Office building into a hub for digital companies, or reinforcing the health system, biomedicine and e-health as a sector for the future, connecting research and future investments (such as the future expansions of Hospital Clínic, Hospital del Mar and Hospital Vall d’Hebron).

During the working sessions, there was an analysis of the acceleration of digitalisation, which is changing consumer habits, the way we work and even our use of public spaces. One example of where innovation and knowledge will be key factors is in projects like Barcelona Innovation Coast (BIC), which promotes research and innovation all along the coastline in order to consolidate the city as Southern Europe’s Capital of Innovation.

Another project presented was Barcelona Sports Tech Hub, in which Olympic Barcelona’s infrastructures take on a new dimension in the 21st century, in order to make the city an international benchmark for knowledge, talent, resources and innovation skills in the relationship between sport and technology as well as between eGames and eSports. 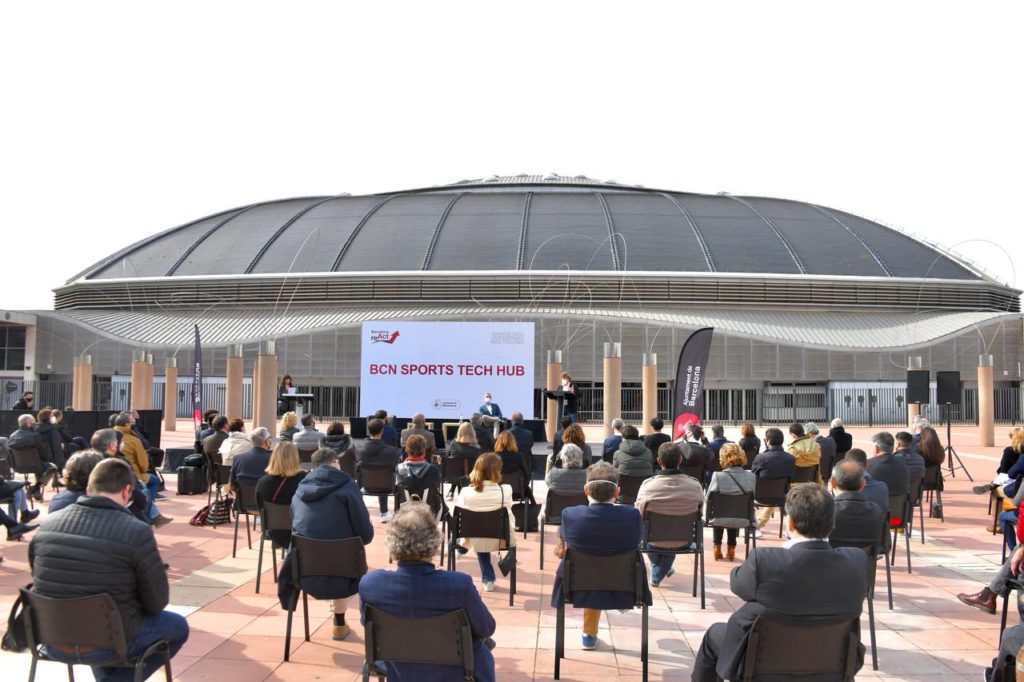 Future mobility was also present during the debate. Barcelona wishes to continue leading the big transition of people and goods transportation in urban environments, in order to create a city and metropolitan region that are more sustainable with cleaner air, a vital factor for ensuring habitability, and from an economic perspective, in terms of attracting talent and investment.

Ideas on new ways of working and employment in the future were shared with civil society, trade unions, employers’ associations, businesspeople and entrepreneurs.

There were also discussions about the urgent need to reactivate sectors linked to the visitor economy, such as commerce, catering and tourism, through a new model focusing on more sustainable, better-quality culture.

The reAct sessions highlighted Barcelona’s capacity for leading the organisation of future events in the context of the pandemic. This will be shown once again this summer by the Integrated Systems Europe (ISE) fairs and the Mobile World Congress (MWC), with formats adapted to the health crisis, which will be a foretaste of the big events that will once again be organised in the city in coming months and years.

The reAct working sessions held over four days were a success in terms of their participation and following:

All the speeches and interventions will be disseminated outside the reAct Sessions, which closed today. They will shortly be available to everyone online, on the Barcelona City Council website

Stay up-to-date with what is happening in Barcelona, ​​the activities you must not miss and the news that interests you
Access