In Ethiopia the cross is particularly venerated as the symbol of Christianity par excellence and as a powerful apotropaic sign. It is omnipresent in religious life positioned behind the altar during the Eucharistic liturgy and other services, carried in the processions, used by the priests to bless the faithful and celebrated in two important Church festivals: the Finding of the True Cross by the empress Helena and the Exaltation of the Cross. The small pendant crosses are worn by every Ethiopian Christian but especially by women, often as a complement to a cross-tattoo on the forehead, hand or neck. Important religious and para-religious texts dedicated to the cross were composed in Ethiopia and several rulers took the name Gäbrä Mäsqäl - the Servant of the Cross as their regal name. That particular devotion resulted in innumerable amount of objects produced for liturgical purposes and for personal use. They are made of wood, metals, leather, grass, and stone with help of different techniques and display an endless variety of forms and decorations.

Generally the crosses are divided into four categories: staff, shafted, hand and pendant crosses. To the first group belong the long staffs topped with a small cross, the whole forged from one piece of iron. Usually decorated with simple knobs spread alongside the staff, some sumptuous examples have copper, bronze or gold inlays. These crosses are connected with wandering monks and the important monastic figures but they may serve in the altar liturgy. It is also the function of the large and intricate shafted crosses which are always carried in the processions. Initially casted in bronze or copper in the lost-wax technique, later on they were cut from brass, silver and different types of alloy.

Hand crosses are personal objects possessed by every Ethiopian ecclesiastic. Until recently they were often executed by the owner of the material which was at hand. Used for blessing, they may be spread inside the church around the windows in the apotropaic purpose, the larger examples serving as the altar crosses. The characteristic element of these crosses is the handle ending with a squared base, that when large was used for an extra decoration and/or inscription. The pendant crosses are mostly manufactured of metal, cast or cut in one piece. They display the greatest variety of forms and decorations because besides the religious meaning they are functioning as personal ornament.

The dating of the crosses is very difficult. Only few are supplied with the inscriptions which allow us to connect them with the historical figures. The examples bearing the figural representations may be dated on stylistic grounds. For the others, less certain criteria may be taken into consideration: for instance, preference for some materials, forms and decorative elements. Generally, the majority of iron staff crosses are dated to the 13th or 14th century. The same period is ascribed the shafted wax-casted bronze or copper crosses. The earliest are simple, Greek crosses with flared arms or the compositions with a small central cross closed within a quatrilobe, pear-shaped, oval or round frame. Some of them were gilded. A particular group referred to as the “Lalibela crosses” departed from the conventional form of the cross by addition of elaborated, arched and angular components around the central part and by the introduction of decorative motifs based on stylised vegetal and zoomorphic elements. In the 15th century the crosses filled with intricate openwork design dominated, often diamond shaped, in the 16th the short-armed crosses with elaborately interwoven finials and large centre square decorated with incised figures. In the 18th century the large equal-armed crosses cast on four pieces with figural scenes appear, engraved on the front and the back and with large mouldings on the shaft. They are named “Gondarene” because several examples belonged to the churches of Gondar – the capital city between 1630 and 1850, some being the votive gifts of the members of the royal house. That type of shafted cross was largely reproduced and dominate until the present.

The oldest hand crosses roughly dated to the 14th and 15th century were made of iron with the upper part in open-work design and the handle ended with a small cube. Later on brass, wood and occasionally silver were used. The formal development of this group was very similar to the shafted crosses. The had crosses made of wood that display an amazing variety of forms and ornamentation including the examples painted and decorated with glass and metal inlays as well as with handles carved in the form of human figures, the latter dated to the 19th century.

There are very few old pendant crosses preserved, one of the reasons being the custom to bury them with the owners. It was suggested that three copper crosses in the collection of the Institute of Ethiopian Studies in Addis Ababa (inv. no. 6722, 4872, 5182) and dated to the 14th or 15th century are among the oldest. Two very fine examples, one made of copper, the second of gilded silver, both datable to the 15th century based on the style represented by the figural engravings, are kept in the monastic church of Wuqén in the province of Tembén. From the same time originates an unusual cross carved in ebony kept in a private collection in France. However, most of the pendant crosses which appear in several collections are from the 19th and 20th centuries. Mostly made of silver or silver alloy they are still mass-produced and available in the markets around Ethiopia. Some of them are supplied with an ear picker because it is believed that during ear-picking evil spirits may enter the human body – the danger prevented by the cross. An interesting group which has not yet attracted the attention of the scholars and collectors are the crosses twined of grass, often by children, on the occasions of church festivals. 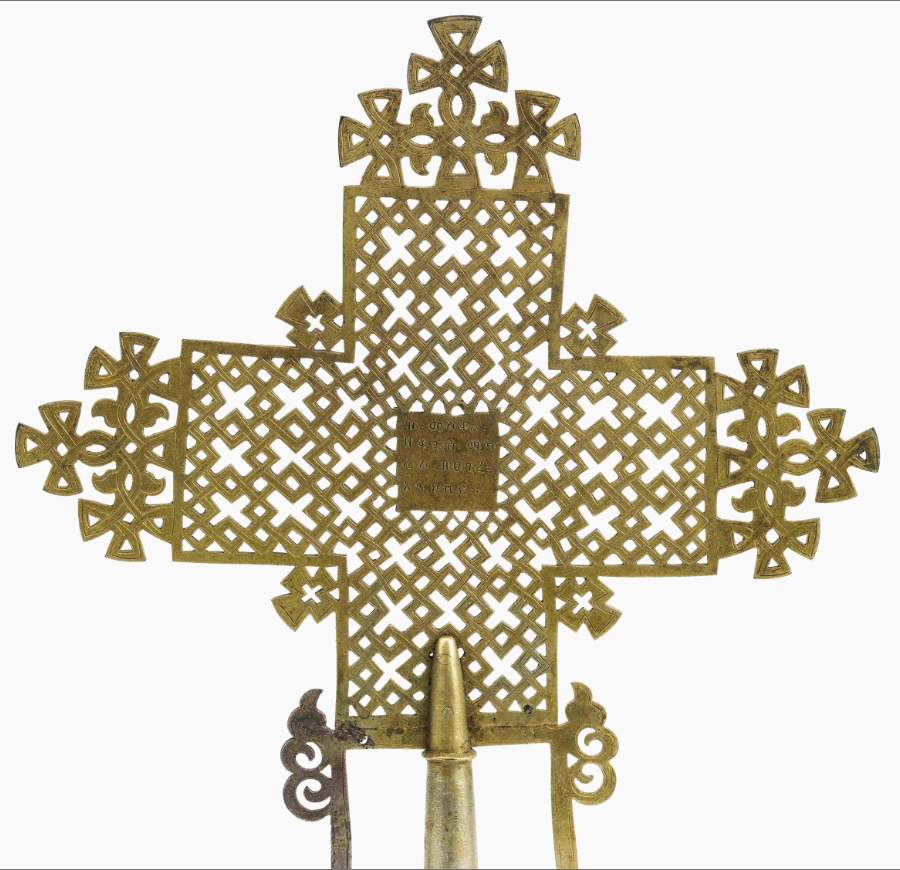 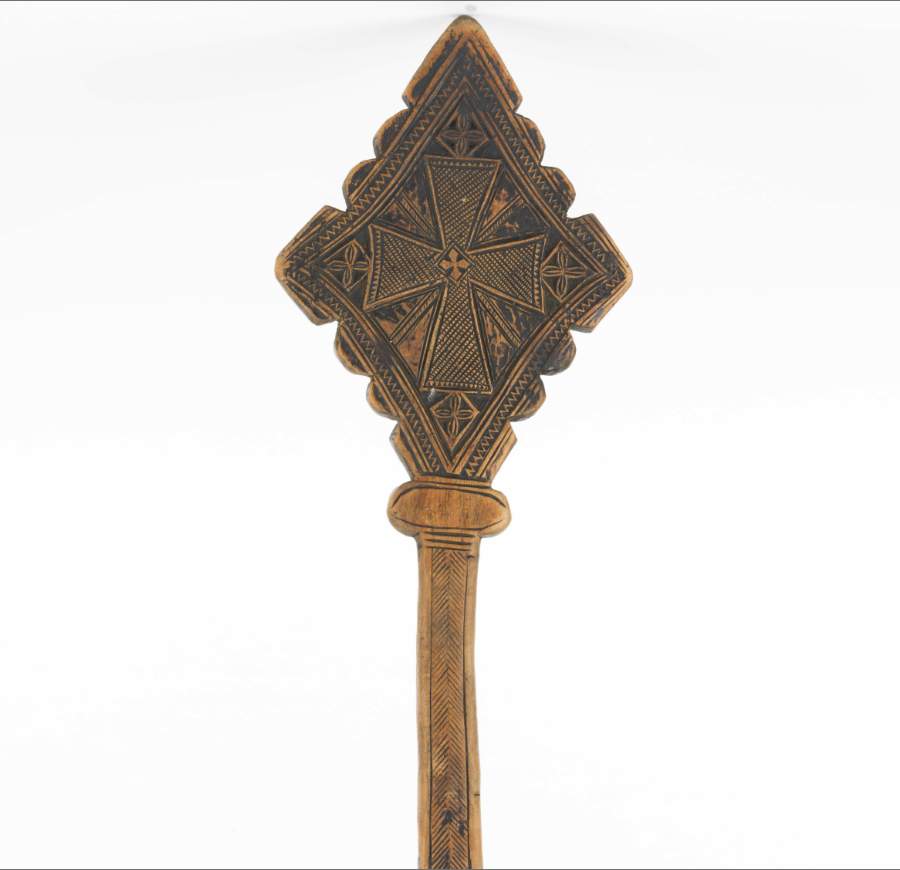 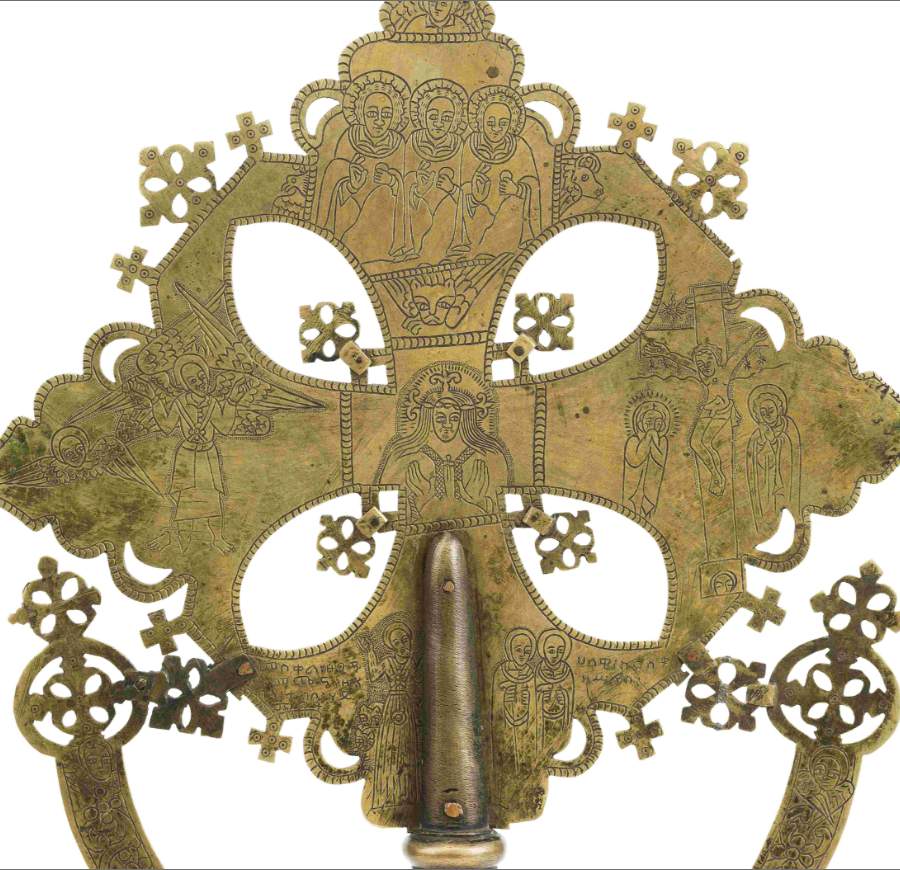 Hall no. 5 in the Montcada Venue, on the ground floor, is dedicated to the Yoruba culture. One of the main characteristics of their beliefs is the art of Ifa divination.