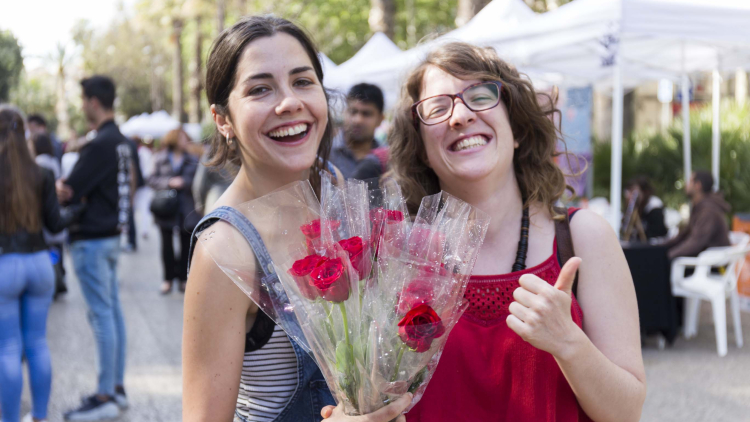 According to Sant Jordi tradition, every 23 April thousands of people go for a stroll and enjoy one of the most special, intense and beautiful days of the year.

For Sant Jordi you don't need to go to a bookshop to see books. There are thousands all around you, on every corner, every street and in every square. The main artery is the Rambla, packed with stalls and authors signing their latest works, with bookshops from every neighbourhood taking the streets and flooding Barcelona with their best literary offerings. Florists, meanwhile, sketch Barcelona in all the colours of spring, while lovers give each other roses in a gesture of love writ large. Confectioners make chocolate knights and dragons, and bakers bake delicious bread with cheese and sobrassada sausage in the colours of the senyera, the Catalan flag. Everyone makes their gesture so you can make yours.

Sant Jordi is all about culture, flowers, love and public participation. And just as Barcelona is an open, inclusive and participatory city, so too is Sant Jordi.

Sant Jordi is the festival of gestures in the form of books and roses for the ones we love most.

This Catalan tradition dates from the start of the 20th century, when the booksellers belonging to the Gremi de Llibreters (Booksellers Guild) and the Cambra Oficial del Llibre (Official Chamber of Books) decided to commemorate 23 April because the writers William Shakespeare, Miguel de Cervantes and Garcilaso de la Vega all died on that date. It is also the date on which other famous writers were born or died, such as Josep Pla, Maurice Druon, K. Laxness, Vladimir Nabokov and Manuel Mejía Vallejo. UNESCO declared this a global tradition in 1996, since when it has been International Book and Copyright Day.

Thanks to its strong literary tradition and commitment to literature, Barcelona was recently included in UNESCO's Creative Cities Network as a City of Literature. The title implies world recognition of Barcelona's literary sector and literature.

Roses reflect the outcome of the legend and come in every colour, symbolising various moods and feelings towards people. Red is the symbol for love and admiration, and more red roses are sold than any other colour on this day.