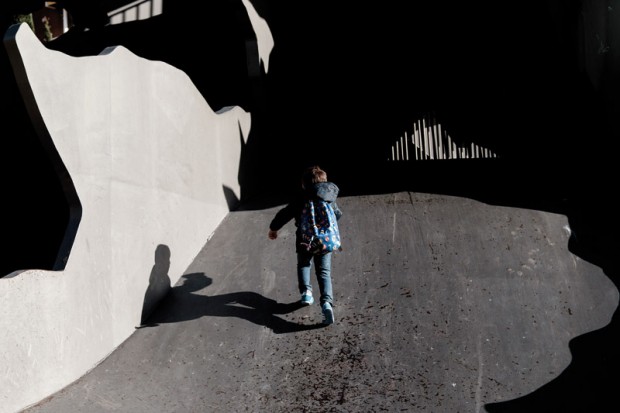 Barcelona’s Mental Health Plan emphasizes children and young people, as these are the groups most vulnerable to psychological suffering and illness. Barcelona is the only city in Spain and one of only a handful in Europe with a project of this kind. In its first year of existence, over 80% of the Plan’s measures have been applied, especially those focused on prevention and early detection.

Nobody in her family understood what was happening. She had always been a sociable girl with plenty of friends, and she always got good marks. But one day she started saying that she didn’t want to go to school. That she didn’t like it. That nothing in particular had happened, but she didn’t want to go outside. She also didn’t want anything to do with her friends. Faced with the idea of going to class, she would throw up, start trembling and suffer from serious anguish. At the time, she was 14 years old.

Her parents didn’t know what to do; desperate, they sought help at the neighbourhood Mental Health Centre for Children and Young People (CSMIJ, according to its Catalan acronym). “She started suffering from anguish and lots of stress, without any clear trigger. It seems that she couldn’t take in the lessons like she wanted, and it made her shut down”, recalls Luis Miguel Martín, the psychologist in charge of the CSMIJ in Ciutat Vella and Sant Martí, who dealt with her case. 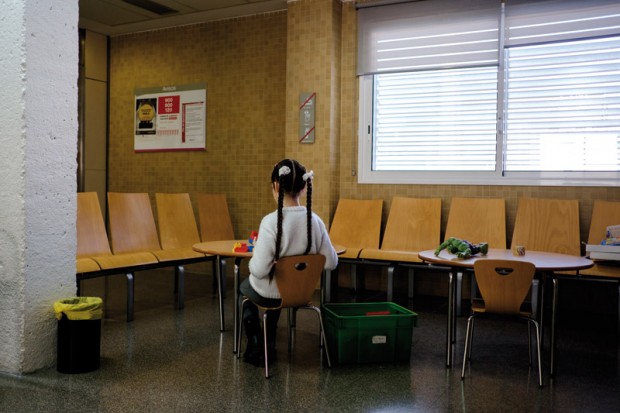 A girl waits for her turn at the Mental Health Centre for Children and Young People (CSMIJ) at the Hospital del Mar.
Photo: Arianna Giménez

It’s likely that the 14-year-old had been suffering for a while before her parents began to suspect anything. It’s fairly common for children to fall silent when they don’t feel well. Often, they won’t say anything out of fear, shame, because they don’t know they’re sick, because they don’t understand what’s happening to them or because they don’t have the language to express themselves, and they somaticize their suffering. “What we did is give her the tools to make it through” notes Martín. “Just like you need to train and build up muscle to run in a marathon, to face certain life situations you have to train every day. So, we gave her a daily plan that even said what time she had to wake up—her schedule had gotten all mixed up, she slept during the day and was awake all night. It included simple tasks and required that she study her favourite subjects. We also gave her medication to help reduce her anguish and her physical symptoms. Now she’s in baccalaureate, and a little while back she came to interview us for the final project she’s preparing on mental health. She’s recovered.”

Just like this young lady, between 10% and 20% of children and adolescents suffer from mental illness according to an estimate by the World Health Organization (WHO). In the case of Barcelona, just in 2014, 10,517 minors were treated for psychological suffering. This number has increased in recent years, as corroborated by the fact that, for example, in 2016 the city’s CSMIJ attended to over 12,300 individuals. 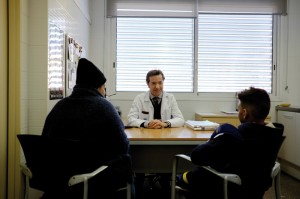 Doctor Luis Miguel Martín, director of application in primary and special programs at the Neuropsychiatry and Addictions Institute (INAD, according to its Catalan acronym), caring for a young user of the Mental Health Centre for Children and Young People at the Hospital del Mar.
Photo: Arianna Giménez

“Half of mental illnesses appear before the age of 18. Many are genetic in nature; this doesn’t guarantee that the person will suffer from the illness, but it is important in determining whether or not they’ll develop it. Environmental factors play a key role. That’s why prevention is so important”, notes Víctor Pérez. Pérez is director of Psychiatric Services at the Hospital del Mar and the coordinator of the Network Centre for Biomedical Research in Mental Health (CIBERSAM, according to its Spanish acronym), part of the CIBER biomedical network, a consortium made up of 25 research groups from eight autonomous communities, with its headquarters at the Carlos III Health Institute in Madrid.

Preventing suffering and mental illness in children and young people as well as in adults is the main objective of the ambitious Mental Health Plan that the Barcelona City Council presented just one year ago. This is a groundbreaking plan in both Catalonia and Spain, and one of only a handful existing in Europe. It will be applicable over the next six years and involves 111 short- and medium-term actions to improve the psychological welfare of the inhabitants of the city. With the plan still in its first year of existence and with a budget of over €50 million, 82% of the included measures have already been successfully applied.

“When we made it to the City Council, we looked at the report prepared by the Public Health Agency with different indicators on health in Barcelona, and we saw that mental health got failing marks. 12% of citizens suffer from a mental illness, ranging from psychological suffering to serious conditions. This number was too high, and we had to do something”, notes Gemma Tarafa, the Council’s health commissioner.

A cross-cutting plan including social measures

As a result, a mental health council was established including, among others, the Barcelona Public Health Agency, municipal political groups, representatives of social organizations working in mental health, and affected families and individuals. For seven months, they worked together to prepare the proposal. “We decided that we needed a cross-cutting perspective, one that wasn’t just medical and health-related; we knew that certain factors like poverty, housing or unemployment also influence people’s mental health”, noted Tarafa.

As a result, the plan includes measures like preventing people from being expelled from their homes and offering social housing to at-risk families, improving the job insertion of groups in difficult socioeconomic situations or fighting against energy poverty. 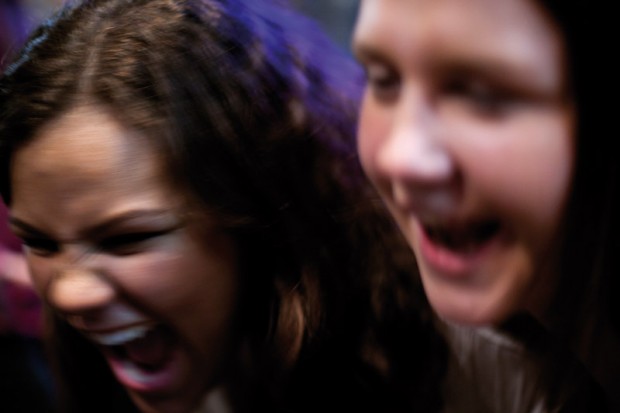 Children, adolescents and young people are the groups most vulnerable to psychological suffering.
Photo: Arianna Giménez

It places special emphasis on children and young people, the most vulnerable population group. “For two years, we’ve had specific data on minors in the health report, and we saw an increase in psychological suffering from 2012 to 2016. This doesn’t mean that minors suffer from more mental disorders or illnesses, it just means that the conditions they face cause them to suffer more”, explains Pilar Solanes, director of the City Council’s health program. Along the same lines, the report reveals that in districts with more socioeconomically disadvantaged neighbours, there is a higher level of suffering among children than in areas with less poverty.

From suffering to illness

Children are the most vulnerable emotionally because, as noted by Martín, the head of CSMIJ in Ciutat Vella and Sant Martí, they lack the resources to face and adapt to the difficult situations that surround them. They still don’t have the necessary psychological maturity to deal with traumatic experiences like their parents being expelled from their homes, violence against women, migration, unemployment at home or illness.

“We also need to consider abuse of any kind, including humiliation, which is much more frequent in children than we think”, notes Víctor Pérez, who is also a patron of the Mentally Ill of Catalonia Foundation.

This suffering can result in children who don’t sleep, are nervous, who spend their time bothering everyone or who are sad; children who suffer from sometimes-chronic somatic disorders such as pain or intestinal disease, or even severe behavioural disorders that lead to aggression against their parents or other minors. If this mental suffering becomes chronic, it may become a mental illness such as depression. “We need to protect children and adolescents” notes Martín, who explains that CSMIJs attend to more and more young people with self-harming behaviour. “They try and ease the pain or the unrest they feel by harming themselves, like by cutting themselves. It’s not that they want to commit suicide or hurt themselves; it’s that they don’t know how to manage adverse reactions or emotions, they don’t have an emotional education, and they impulsively act this way”, states the psychologist.

A period for building one’s personality

The Barcelona Mental Health Plan puts forth a series of measures aimed at educating people in emotions, and in the early detection of psychological discomfort or mental problems that may affect children, adolescents and young people, always from the point of view of prevention. To this end, for example, a pilot experience has been established at several city schools with the goal of evaluating its effectiveness before it is applied in other schools. It involves a program to educate boys and girls from the ages of 3 to 6 in emotions. “This is the age when they build their personality, and we can help them more effectively if we work preventively”, notes Solanes, who adds that “this age is a critical period for establishing the foundations of good mental health.” 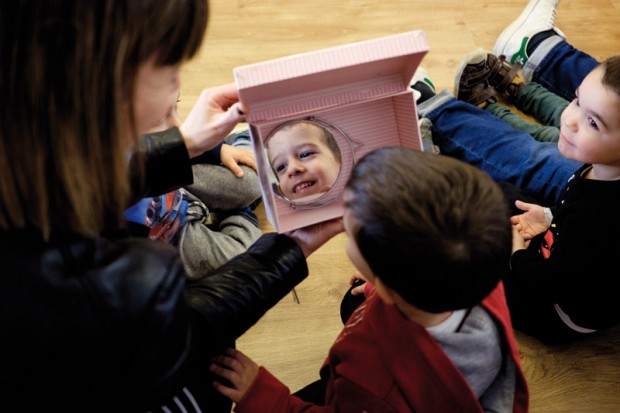 A session of the emotional education program being applied as a pilot test in the Nou Patufet School in Gràcia.
Photo: Arianna Giménez

“It’s all about giving them emotional resources and abilities so they can deal with feelings like anger or frustration, for example”, explains Tarafa. The plan also includes training for teachers, recreational counsellors, cafeteria staff and those working in extracurricular activities so that they integrate emotions into their work. In addition, workshops are planned with families to work on these abilities. Furthermore, in the neighbourhoods with the worst mental health statistics for young people and adolescents, the plan is to provide schools with professionals such as social educators who can give support to teachers, as well as to children with difficulties.

Another measure included in the plan and aimed specifically at adolescents are youth consultation spaces that will be available in 10 of the city’s districts in 2019. These are physical spaces where young people can go to express their doubts or psychological suffering to psychologists, psychiatrists and social educators who, if necessary, will send them to medical centres. One such space in the Marina neighbourhood, known popularly as La Zona Franca, has already proven effective.

“Prevention in adolescents is really important to keep issues from becoming chronic. This is a very important stage in neurodevelopment, critical to avoiding future complications. We need to care for these kids using a service that’s accessible and nearby, to try and prevent their suffering from becoming a mental illness or a significant emotional disorder”, Martín warns.

According to the Barcelona health report, one of the factors that most affects the psychological welfare of young people is unemployment, especially long-term unemployment. As a result, the plan includes measures to reinforce job insertion in young people, starting with those living in the most disadvantaged districts. It also prioritizes the insertion of young people who suffer from poorly-diagnosed mental disorders, such as schizophrenia or depression. In the end, it’s about shifting the bulk of our efforts from the treatment to the prevention of mental illness. “This is a revolution that we need to make as a society. We need to learn to understand what we’re dealing with and manage emotions, both positive and negative (frustration, rejection, rage); we need to learn how to listen to ourselves and listen to others, and to be willing to recognize that they may be right”, advises Tarafa.

“It’s about identifying discomfort, recognizing the symptoms and associating them with an emotional problem. We need to make it a fact of life, and not to experience it as something strange”, Martín states. He adds that this is the only way we can change our current mental health situation. 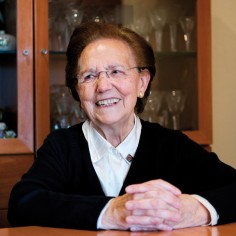 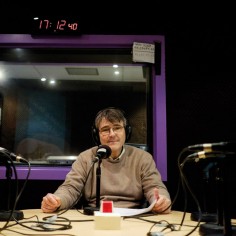 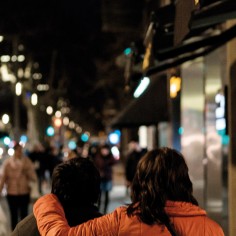