Price: € 6 + general admission to the museum. Entrance to the museum is free every first Sunday of the month, so in this case you only would have to pay the 6 euros that the guided tour costs. 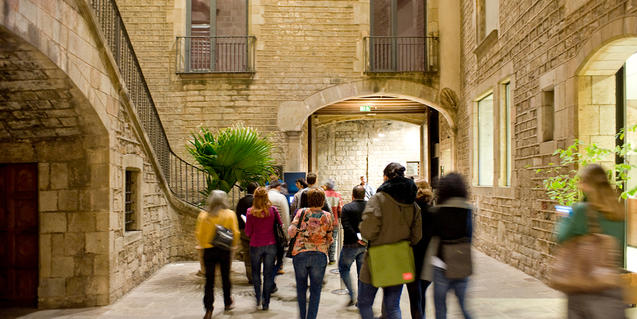 The Picasso Museum in Barcelona is one of the great references of Picasso's work on an international level. The artist himself had the express wish to create a museum of with his work in the city that was the scene of his youth and that was crucial for his artistic training development. The museum, inaugurated opened in 1963, and has a very complete collection, donated to the city in part by the artist himself in part due to donations of the artist himself. It is an especially rich contains a collection, which is especially rich in artworks created in with regard to the artist's youth works and is practically exhaustive until the blue period, which helps to understand the early stages know the gestation of whom what would become one of the great and most innovative artists of the 20th century. The museum also houses an important representation of works from 1917 and the series Las Meninas (1957).

All of this can be admired in depth during the guided tours that the Museum offers again on Sundays, led by an official guide, and at a price of 6 euros, plus the price of general admission. During the visit you also get to learn about, the architectural wealth of the 5 Catalan Civil Gothic palaces that comprise the museum and are of the Catalan civil Gothic of located on Montcada street that make up the museum is also made known: the Palau Aguilar, the Palau Baró de Castellet, the Casa Mauri, the Palau Meca and the Palau Finestres.

The visits take place every Sunday in Catalan (12:45 pm); Spanish (12:30 pm); English (11am) and French (11:15 am). It is necessary to purchase the entrance ticket with a guided tour or make a reservation in advance, price: € 6 + general admission to the museum. Entrance to the museum is free every first Sunday of the month, so in this case you only would have to pay the 6 euros that the guided tour costs.

For more information an tickets, see the link.