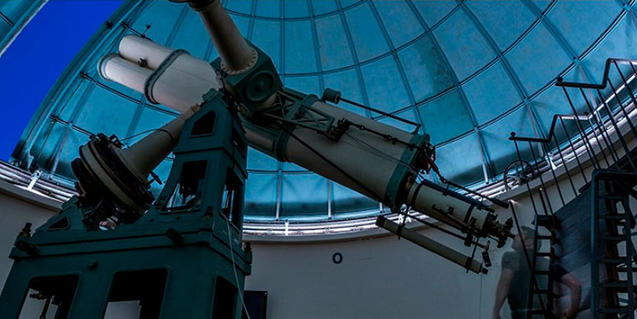 In autumn and winter, the Fabra Observatory is holding guided tours of its facilities and star observations through its telescope.

On the coastal side of the Collserola mountains, in its iconic modernist building, the Fabra Observatory has been surveying the heavens, the weather and earthquakes in Barcelona and the surrounding area for more than a century. 115 years since it opened, it is still in operation today and, in fact, is the fourth oldest active observatory in the world. Friday and Saturday evenings from 25 October to 30 May, the facility offers guided tours that include direct observation of a star through the century-old telescope and, of course, magnificent views of the city.

The building is owned by the Royal Academy of Sciences and Arts of Barcelona and houses items and instruments that recount its activity and history since it opened in April 1904. Visiting it is a journey through the history of science in Catalonia and Barcelona, where you can find out how research is conducted in the fields of astronomy, meteorology and seismology. The length of the tour and the activities on offer depend on whether you go on a Friday or Saturday, but in both cases you have the opportunity to see a feature from space through the huge refracting telescope, provided clouds do not get in the way.

On the first weekend of tours, the telescope will be pointing at the majestic Saturn and its rings. Then, as in other years, the Moon will be one of the key features in the sessions. Viewings from the Fabra dome reveal all manner of secrets about the satellite that cannot be seen with the naked eye. Albireo, a double star in the Cygnus constellation, is also often viewed as part of these tours. However, this year other objects not previously included will be on view, such as the astounding Orion Nebula, in the constellation of the same name, and Alcyone, part of the Pleiades cluster, among others. You can see the detailed observation calendar in the programme.