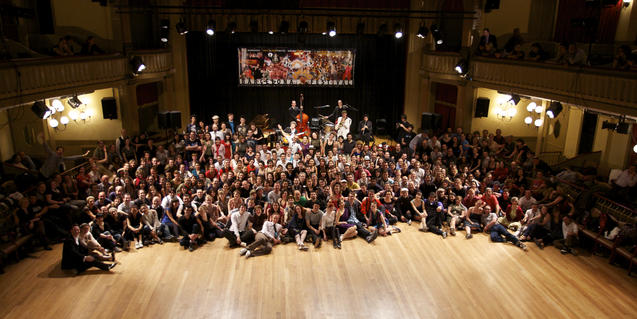 The BarSWINGona festival is dedicated both to swing and to the sub-genres which held sway on the dance floors from the 1920’s to the 1950’s and once again coincides with Easter Week in Barcelona. This year’s edition, the sixteenth, will be held between the 27th of March and the 1st of April. As usual, world renowned bands and dancers will descend on the city, converting Barcelona into the swing capital of the world for a few days.
Once again the Casino de l’Aliança del Poblenou will be the centre of operations, although the festival inauguration will be held in the Gràcia district on Wednesday the 27th with a swing parade that begins in the Plaça de la Virreina and continues to the Plaça Ana Frank, culminating with a party in the Centre Artesà Tradicionàrius. Following this, back in Poblenou, there will be four days of workshops, competitions, live music and thematic parties. At midday on Monday the 1st of April the festival will be brought to a close with a performance by the Sant Andreu Jazz Band in the Plaça Reial.
As with every year, the principle attractions include international ‘Masters’ who come to the city to give classes on their respective dance styles. This year welcomes Maeva Truntzer and William Mauvais from France, Isabella Gregorio from Italy, Pontus Persson from Sweden, Naomi Uyama and Skye Humphries from the USA and Javi & Encarny from Valencia.
﻿The festival will close in the Plaça Reial with a big party of the Swing with the Sant Andreu Jazz Band and the teacher Chamorro, the dancers of BALLASWING and hundreds of lindy hoppers come from all over Europe.
Ticket prices vary depending on whether it’s a ticket that includes entry to all the shows and activities or just those that are held on the weekend. There are also cheaper tickets for ‘beginners’, which allow entry to fewer classes, and tickets exclusively for the parties.
Publication date: Monday, 18 March 2013