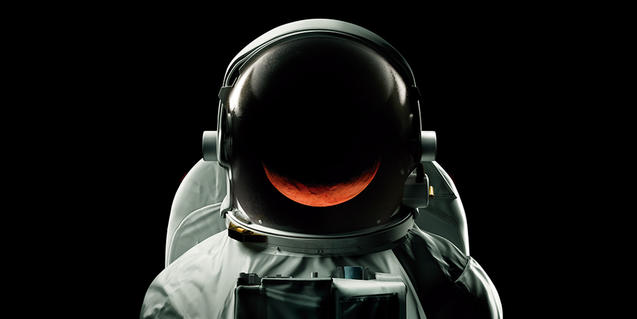 The CCCB is hosting an exhibition devoted to our neighbouring planet from a perspective that combines science, art and literature.

The planet Mars is one of the celestial bodies most easily distinguishable with the naked eye from Earth. When it makes its presence felt, it appears as a bright, faint orange dot in the middle of the starry sky. It is hard to believe the inordinate fascination that this small object (compared to the vastness of the cosmos) has aroused in humankind. Today and throughout history, our gaze has been directed towards Mars. We have contemplated it as a world capable of containing life, it has been an endless source of artistic inspiration, and we have studied it in search of answers about our own planet that we struggle to find from here. We have even sent several probes and are considering manned missions. Now, from 25 February to 11 July, the Centro de Cultura Contemporánea de Barcelona is analysing our link with this planet through the exhibition Mars. The Red Mirror.

The exhibition brings us closer to the red planet through different perspectives structured in three exhibition areas. The first is from a historical perspective, going back to classical times, when Mars was the name of the Roman god of war and had its equivalent in Greek mythology, Ares. The mythological representations of Mars in different cultures, the evolution of astronomy since the time of Ptolemy and writings about the god Mars are the focus of this area that takes us back in time.

The second area reviews the impact of knowledge about Mars on culture, especially in science fiction. Based on the discoveries about the red planet and space in general, authors such as H. G. Wells, Ray Bradbury and Kim Stanley Robinson among others have anticipated possible futures and scenarios that have permeated the popular imagination, but which have also raised new horizons for scientific and technological progress.

The third area presents Mars as an alternative (possible or impossible) to an Earth altered by global change due to human activity, but also as a laboratory in which to reflect on and advance research into major questions still unresolved by science, such as the origin of life. Through samples resulting from decades of research focused on Mars, this area invites us to reflect on the role of humanity on Earth.

As an activity prior to the exhibition, on Thursday 18 February the CCCB has organised a live broadcast of the landing of the Rover Perseverance on the Martian surface, commented by scientists from different disciplines. This is one of the many activities programmed around the exhibition. On 26 February, the day after the opening, a debate between the science fiction author Kim Stanley Robinson and the cultural researcher José Luis de Vicente on space as an engine of utopian thought will kick off this cycle of proposals. There will be many more to come; stay tuned!