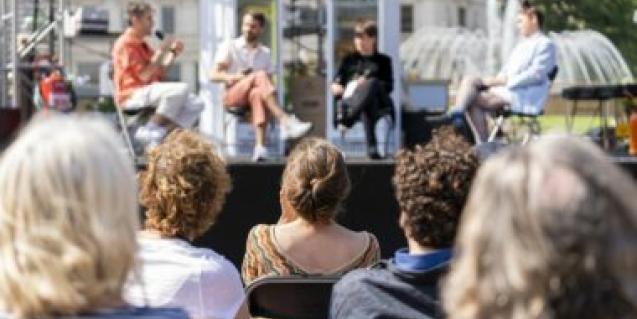 Transforming public space to make it more inclusive, combatting inequalities and tackling climate change are just some of the main challenges facing cities. In a bid to generate reflection and imagine new urban scenarios, the Model Architectures Festival is making its return to Barcelona.

The new edition of the event, organised by Barcelona City Council and the Architects’ Association of Catalonia (COAC), will be managed next year through the Fundació Mies van der Rohe and maintains the spirit from when it made its first appearance in May: to transform the city into a space for architectural experimentation and an open platform for people to exchange ideas.

With over 75 organisations taking part and 200 activities and debates, the 2022 edition was the first main event for when Barcelona becomes the UIA-UNESCO World Capital of Architecture for 2026. Next year’s Model aims to become consolidated as a meeting point for architectural talent, emerging design and city residents as a whole.

Award for creation and experimentation

One of the main new aspects to the second edition is the creation of the Model Award for Architectural Experimentation. This call opens today (16 December) to groups and individual creators wishing to design the installations for the festival, as well as those interested in joining the creative team to plan the project.

The awards seek to recognise the work of local and international creators and invite people from the sphere of architecture or cultural research to take part in the event.

The award carries a monetary prize and offers participants the chance to design installations, augmented realities, curated projects and experimental projects for the second edition of Model, in three categories:

- Model Installations Award: this provides support for the production of projects to promote new forms of occupying, programming and building public space, and carries a prize of 8,000 euros (before tax).

- Model Thought and Curation Award: for initiatives based on curation projects, exhibitions and debates promoting new forms of occupying, programming and building public space. The award carries a prize of 4,000 euros (before tax).

The projects put forward will be assessed by a jury made up of Tatiana Bilbao, founder of the Tatiana Bilbao Estudio; Carson Chan, curator and director of the Emilio Ambasz Institute for the Joint Study of the Built and the Natural Environment, at the MOMA in New York; Eva Franch, artistic director of the Model Barcelona Architectures Festival; Xavier Matilla, chief architect with Barcelona City Council, and Anna Ramos, director of the Fundació Mies van der Rohe.

The call is open until 16 January 2023, at 2 pm. Rules and registration on the festival website: model.barcelona.