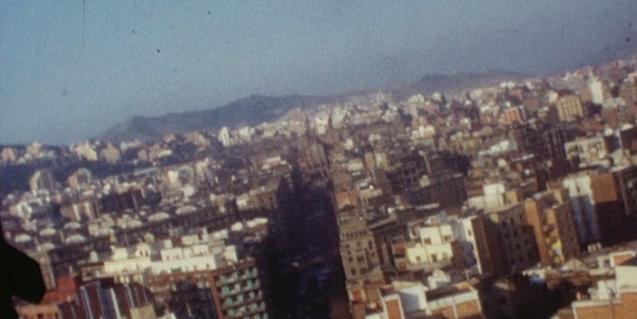 Visions of Barcelona includes four films about the urban transformation of Barcelona during the last decades and the first feature film by Jackie Raynal, from 1969, about feminism.

Xcèntric is the ongoing cinema program by the Centre de Cultura Contemporània de Barcelona (CCCB) through which the Xcèntric Archive was born. The Xcèntric Archive has the same criteria as its older brother — disseminating experimental and auteur audiovisual creations — but with the addition of the features of an archive, such as conservation, indexing and documentation.

Physically, the Archive is located on floor -1 of the CCCB. It has a thousand film references and a consultation area with a collective screen for groups of up to six people and several monitors to watch the films individually or in pairs. Those interested can even prepare their own film session by consulting the online catalogue, the biographies of the filmmakers and the recorded presentations of many of the films. On the other hand, tailor-made tours can be requested by writing to xcentric@cccb.org.

If you are looking for guidance, we recommend the brand new playlist the Archive has just put together: Visions of Barcelona. It is composed of four short films of varying lengths, and the first feature film, which is 65 minutes long, by French filmmaker Jackie Raynal.

As the Archive usually does, the five works have an open dialogue with each other. This dialogue makes it more satisfying and enriching for the audience, who will be able to rediscover the city through new perspectives — even if these perspectives have been rescued from the past — and establish new points of connection with their personal experience. In broad terms, the playlist draws a double spatial and temporal route that goes from Antoni Gaudí all the way to the 22@ District.

In Gaudí asesinado por un tranvía (1968), Argentinian Jorge Honik highlights the contrast between the modernist and organic forms of the Sagrada Família with the rational and grey architecture of the industrial sectors and the flat blocks of Franco's developmentalism. In Film-Gaudí (1975), a fellow Argentinian, Claudio Caldini, recreates the Park Güell frame by frame in a mosaic as if it had been created by the brilliant architect. In 22arroba (2008), Italian Maximiniano Viale captures, in a Super 8 film, the chaos, dust and noise caused by the demolition of the old buildings in Poblenou. In Preludio, the Catalan Albert Alcoz transforms the Mies van der Rohe Pavillion into the centre of an abstract art experiment, which blurs out the shapes of the building. And finally, in Deux Fois (1969), Raynal signs a feminist essay, equally dreamlike, in which she reflects on self-representation, the memory's perception, and the materialisation of the female figure.

The Archive collection requires an in-person consultation. Opening times are Tuesday to Friday from 11 am to 8 pm, with the last admission being at 7.30 pm. Children under 18 must be accompanied by an adult. Although the entrance is free, appointments need to be booked in advance through taquilles@cccb.org by indicating the preferred length of the booking (30, 60 or 90 minutes).