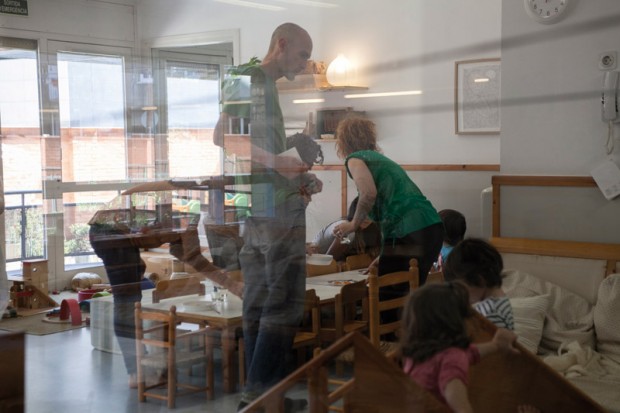 Urban environments are the stage on which our everyday life takes place, in an urban structure that is defined by the values of a capitalist and patriarchal society, two systems that feed off each other. As a result of patriarchal domination and its influence over the creation of spaces, certain activities are considered to be more important socially. For that reason, an urban configuration has materialised that gives priority to certain activities and uses them ahead of others, dedicating more space, better locations and connectivity to them. At the current time, neoliberal policies and austerity cuts have caused major social inequality that has translated into land use phenomena such as the commercialisation of the public space, property investors, gentrification and ‘touristification’, or the prioritisation of tourism to the detriment of local residents.

In this socially and economically unjust city, social characteristics such as gender, social class, discrimination for reasons of race, sexual identity, functional diversity or age, among other aspects, determine the privileges and oppressions we experience in our daily lives within the urban space.

The city we have is the territorial realisation of a socially and economically unjust model; thus, a complete paradigm shift is necessary if we are to put an end to social and economic inequality. According to the economist Amara Pérez Orozco, feminism calls for the sustainability of life to be placed at front and centre so as to achieve a life worth living and to develop an everyday standard of living that is shaped by every element of paid and unpaid work and by commercial and non-commercial policies and processes at the macro, micro and meso levels.

Feminist urban planning places a social priority on the care of other people, but that does not mean pigeonholing women as the carers; instead, it requires that everyone be dependent on other people and that care be a collective responsibility. Rethinking the city from a feminist perspective means no longer creating spaces on the basis of production rationales that are socially and politically restrictive; rather, it means starting to think about environments that place greater emphasis on the people who use them. For that reason, a radical change in priorities is required when it comes to planning the spaces and conditions of a city.

People at the heart

This new urban model places people at the heart of decision-making, taking into account the diversity of experiences and ending the practice of standardising subjects, things, housing and desires. The goal is also to ensure that spaces are adapted to meet people’s different needs, rather than people having to adapt to the conditions of the space. This new urban paradigm is realised in the model of the caring city, whereby cities are seen as places that look after us, that take care of our surroundings, that let us look after ourselves and other people.

In a caring city, public spaces convey a sense of safety, because they are well signposted and illuminated. There are people around who can help: they are visible, vital and promote mutual support, to the extent that anyone can walk unhindered down the street at any time of day without fear of being harassed or threatened.

In this urban model, motorised vehicles, which produce very high rates of pollution, accidents and road insecurity for many people, especially older people and children, no longer dominate. The caring city places an emphasis on a public transportation network that is physically and economically accessible, that connects to a broad network of pedestrianised zones and a range of different spaces (productive, reproductive, leisure, sport, etc.) with diverse opening times, and that has safe waiting areas and does not require commuters to spend a considerable part of their journey on getting to and from stops.

In a caring city, residents are not pushed out of their own neighbourhoods as a result of abusive rental contracts, property investors and regulations that seem only to protect landlords; instead, it enables them to have decent accommodation in fair economic conditions and promotes different housing models beyond nuclear heterosexual-patriarchal family living arrangements.

It’s an urban paradigm that takes diversity and care into account while understanding that people are functionally diverse, that sometimes we are ill, have chronic pain and go through different lifecycle stages during which we can no longer keep up with the imposed rhythms and levels of productivity that can cause frustration and reduce our independence when it comes to enjoying the city.

A city that looks after our environment does not consume unlimited land, energy and environmental resources. It tries to minimise the waste it produces and promotes activities to clean the air it pollutes and ensure clean water for the city. It encourages strategies that take full advantage of existing resources, such as by using under-utilised equipment and spaces and prioritising the renovation of buildings and spaces ahead of the tabula rasa, as is so often the case in urban planning. It fosters the equitable distribution of services, equipment and local businesses in different neighbourhoods, thereby creating certain routes and minimising the use of private vehicles. The city that is concerned with the environment creates green corridors and launches strategies to re-establish the native flora and fauna.

This kind of city looks after us and provides spaces for recreation and different sports, as well as fostering interpersonal relationships in outdoor public spaces or sheltering us from inclement weather, where we can sit down, have a chat and relate with each other without any commercialism interrupting our sport and recreational activities. That city also provides spaces for political participation without them being exploited by politicians. 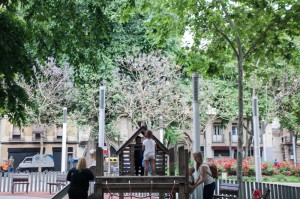 A caring city also enables us to be caring because it provides all the necessary physical support to facilitate all care-related tasks, such as doing the shopping, taking the children to school, accompanying the sick to healthcare centres. This physical support translates into public spaces with play areas for children of different ages, with fountains, public toilets, plant life, shade, benches, tables and other items, as well as appropriate equipment and services to facilitate activities. A caring city fosters the autonomy of dependent persons and also allows people to balance different areas of their daily lives.

Barcelona finds itself at a crossroads, where urban policies influence the type of city being configured. According to Clara Greed, Emerita Professor of Inclusive Urban Planning at the University of the West of England, urban planning can be anything we want it to be: it is not prearranged, it is not a gift from God; it is the creation of realities for women and men. Now is the time to change our realities, to build a more just society based on the pillars of a caring city that radically changes the principles on which our city model has been founded.